US congressional panels to begin fight over Obamacare repeal 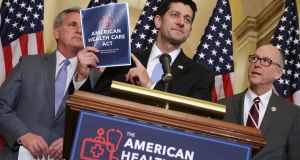 Republican Speaker of the House Paul Ryan holds up a copy of the American Health Care Act during a news conference unveiling the plan to repeal and replace Obamacare. Photograph: Chip Somodevilla/Getty Images

Republicans’ new proposal to replace Obamacare faced its first hurdle on Wednesday, as two key house committees scrutinised the proposal amid deep divisions between Republicans about key aspects of the bill.

The much-anticipated proposed replacement for the Affordable Care Act, otherwise known as Obamacare, was published late on Monday by Republicans in the House, following weeks of background negotiations led by House Speaker Paul Ryan. While president Donald Trump’s team has been involved in negotiations about the much-feted replacement plan, much of the drafting has been done by House Republicans on Capitol Hill, led by Ryan and chairman of the powerful ways and means committee Kevin Brady.

The new plan – which aims to repeal and replace former president Barack Obama’s signature healthcare reform introduced seven years ago – contains a number of changes to its predecessor, including removing the obligation for people who can afford health insurance to buy coverage, repealing the current tax credit system provided by the federal government by introducing fixed tax credits, and scaling back the expansion of the Medicaid programme for low-income people which is credited with bringing millions of Americans into the health insurance market.

Almost immediately, the plan prompted opposition from Democrats, who themselves were subject to bitter recriminations by Republicans when Obamacare went through the legislative process.

As well as the detail of the plan, Democrats have strongly criticised the procedural aspects of its introduction. Unlike Obama’s Affordable Care Act, which was pored over by committees and subject to hours of bipartisan discussions, the Republican replacement plan is being considered by the ways and means and energy and commerce committees within 48 hours of the legislation being published, with a full House vote possible next week.

Congressman Richard Neal, a Democractic member of the ways and means committee which considered the proposal on Wednesday, said the proposal was a “venture into the unknown”, with no costing or analysis undertaken to ascertain how many people would lose access to their healthcare.

“We should have had a period of time to really work with them on this,” the Massachusetts representative said, claiming that the plan was about “cutting taxes for the very wealthy while at the same time curtailing healthcare opportunities for middle-income Americans”.

But the biggest challenge for Republicans may come from within its own ranks. The most vehement opposition is coming from a 40-strong conservative group known as the Freedom Caucus which is opposed to the plan. Representing the most conservative element of the Republican Party, the group is furious about the proposed system of federal refundable tax credits, which it believes represent a new form of subsidy.

Representative Jim Jordan of Ohio and Senator Rand Paul have threatened to introduce their own health care plan, describing the new proposal as “Obamacare-lite”.

Simultaneously, Republicans are facing opposition from the more moderate wing of the party, who are concerned that it doesn’t do enough to protect the beneficiaries of Medicaid.

The congressional arithmetic means that Republicans need 218 votes to pass the measure in the House, with the result that they can only afford to lose 20 Republican votes.

The Senate could be more tricky. While the repeal of Obamacare needs a simple majority of 51 to 49, replacing Obamacare would need a 60-40 majority. With a handful of Republican senators raising questions about the current plan, even a simple majority vote is far from certain at this point.

Unsurprisingly, there has been intensive lobbying by the White House including by chair of the office of management and budget Mick Mulvaney and health and housing secretary Tom Price, with vice-president Mike Pence meeting senior sceptical Republicans on Capitol Hill on Tuesday afternoon. Ted Cruz, a sceptic of the plan, is due to dine with Mr Trump at the White House on Wednesday night.

While he has kept a relatively low-profile on the healthcare proposal, Mr Trump said he was “proud” to support the replacement plan.

“I feel sure that my friend Rand Paul will come along with the new and great healthcare programme because he knows Obamacare is a disaster!”

While House Speaker Paul Ryan expressed confidence that the Bill will pass, it is notable that the White House has described the proposal as a “draft plan”. How much room exists for compromise remains to be seen, but for millions of Americans – many of whom voted for Donald Trump in November’s elections – the final shape of the replacement healthcare plan could have profound implications for their lives and finances.