Catalan independence leaders could face up to 25 years in jail 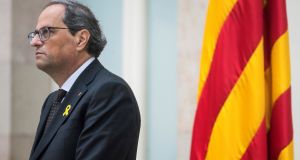 Catalan regional president Quim Torra who said on Friday that Madrid had “missed an opportunity to take the judicial dimension out of a conflict that is political”. Photograph: Quique Garcia/EPA

Spanish prosecutors have called for prison sentences of up to 25 years for those accused of leading last year’s failed Catalan independence bid, amid opposition claims that the government has tried to influence the judiciary.

The attorney general said the supreme court should try former Catalan vice-president Oriol Junqueras, six other politicians and two rank-and-file leaders for rebellion for their role in an outlawed referendum held in October 2017, which was followed by a declaration of independence.

Mr Junqueras, who has been in jail since, faces a possible 25-year prison sentence and could be barred from public office for up to 25 years if found guilty. He is also accused of misuse of public funds. Former Catalan parliamentary speaker Carme Forcadell and rank-and-file leaders Jordi Cuixart and Jordi Sànchez, who are all accused of rebellion and are also in custody, could face jail sentences of up to 17 years.

Five former ministers in the Catalan government face jail terms of up to 16 years for rebellion and misuse of public funds, while another nine defendants face lesser charges.

Meanwhile, former Catalan police chief Josep Lluís Trapero, who will be tried separately along with three others by the high court, could face a jail sentence of up to 11 years if found guilty of rebellion.

However, there was controversy when equivalent charges presented by the state lawyer’s office, which works in conjunction with the justice ministry, were noticeably more lenient. The state lawyer did not call for any of the defendants to be tried for the most serious charge of rebellion, asking for a 12-year sentence for Mr Junqueras for sedition and misuse of public funds.

The rebellion charge is particularly controversial as it implies that violence or the threat of it was used, something the independence movement insists was not the case.

Nonetheless, the state lawyer’s position drew an angry response from the Catalan government. The region’s president, Quim Torra, said that Madrid had “missed an opportunity to take the judicial dimension out of a conflict that is political”.

Meanwhile, unionist opposition parties claim that Socialist prime minister Pedro Sánchez has been pressuring the judiciary to soften its case against the independence leaders because he needs the parliamentary support of Catalan nationalists. The state lawyer’s refusal to use the rebellion charge therefore drew strong criticism.

Pablo Casado, leader of the conservative Popular Party, tweeted that it was “indecent that the government humiliates Spain by forcing the state lawyer to distance itself from the attorney general and not accuse the coup-mongers of rebellion”.

Justice minister Dolores Delgado denied that the government had influenced the position of the state lawyer’s office, which, she said, was based on “technical, professional and judicial criteria”.

The trial is expected to begin early next year.

Several others accused of involvement in last year’s referendum who are not in the country, such as former Catalan president Carles Puigdemont, are not facing charges because they cannot be tried in their absence.