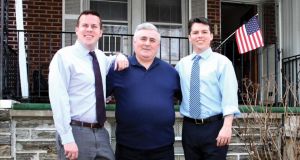 Brendan Boyle (right) with his brother Kevin, speaker of the Pennsylvania House of Representatives, and their father, Frank, who is from Donegal.

Brendan F Boyle says his father still counts and prays in Irish 44 years after leaving Ireland. Frank Boyle left Glencolmcille in the Donegal Gaeltacht in 1970 at the age of 19. Philadelphia, here he came.

Now Frank, a janitor on the Broad Street line of the Southeastern Pennsylvania Transportation Authority or Septa, hopes to see his son elected to the US House of Representatives in November’s Congressional elections and become the only member of Congress with an Irish-born parent.

Wealthy rivals
Not that Frank is sitting back and just hoping it will happen; the Donegal man changed his working hours to the 5.30am to 2pm shift cleaning the north-south Orange subway line running through Philadelphia so he could knock on doors for his son’s campaign battling wealthy rivals in one of the most hotly contested and heavily funded Democratic primary races in the country’s mid-term elections.

“People are very unhappy about the economy, jobs, crime and the deterioration of their neighbourhoods,” says Frank, still with a strong Donegal accent after four decades in the US, referring to the concerns he hears on the doorsteps of Philadelphia and nearby Montgomery County.

“Brendan is the only candidate from the Philadelphia area and people think Brendan has more in common with them. The other candidates spend a lot more on TV commercials and they have that advantage. That is why going door-to-door is a good way to balance it out.”

Brendan Boyle (37), a member of the Pennsylvania House of Representatives since 2008, has to contend with the star-power of Bill Clinton in this safe Democrat district. Marjorie Margolies (71), who is hoping to regain a seat she held in the 1990s, is Chelsea Clinton’s mother-in-law. (The Clintons had big family news this week. Hillary announced via Twitter that Chelsea and Marjorie’s son, Marc Mezvinsky, are expecting their first child: “My most exciting title yet – grandmother-to-be!” Hillary exclaimed.)

Public debates
Grandfather-to-be Bill showed up at a fundraiser for Margolies at a Philadelphia hotel last week where, for $1,000 a pop, punters could enjoy an hors d-oeuvres reception and for $5,000 a private VIP lunch reception and photo opportunity with the man himself. Margolies was very late to the campaign, failing to show up to the first public debates between the candidates. This has left her open to accusations from Boyle that she is relying on the vote-pulling power of a famous relative to get her elected.

Boyle, a pro-labour candidate with backing from Pennsylvania’s trade unions, rails against what he sees as her sense of entitlement and the multimillionaire culture in politics in general. Running on a campaign against income inequality when the gap between the richest 1 per cent and everyone else is wider than ever, Boyle hopes to win the votes of Philadelphia’s working class, people like his father.

“This race is not about Bill Clinton; it’s about Frank Boyle and it’s about the millions of others like him who need a champion in Washington, ” he said during a debate this month. His other rivals in a crowded field are State Senator Daylin Leach and Dr Valerie Arkoosh, an obstetric anaesthesiologist.

Emigration
With strong family bonds back in Donegal, Boyle, a graduate of the University of Notre Dame and Harvard, wants closer ties between a modern American and modern Ireland and, with a more recent experience of emigration through his father, he believes he has a greater understanding of immigration’s role in the community than other politicians.

The ferocious campaign in Pennsylvania’s 13th Congressional district, now well over a year old, has been “like drinking from a firehose,” says Boyle. Learning from his parents’ work ethic – his late mother, a daughter of Easkey, Co Sligo emigrants, was a school crossing guard working through Philly’s blistering summers and freezing winters – Boyle believes hard work will be rewarded with opportunity in politics.

His father, a warehouse worker for 25 years before he cleaned subways, is popular with constituents on the campaign, says Boyle. His younger brother, Kevin (34), is speaker of Pennsylvania’s House; they are the only two brothers to serve simultaneously in the chamber’s 300-year history.

Frank grew up in a staunchly Fianna Fáil house in Donegal filled with a love of politics and sport. Sometimes he enjoyed backing the other party during family debates “just to get the fun going”.

Clearly he passed on a passion for politics raising his sons. “I might have but I never knew that I did,” he said.