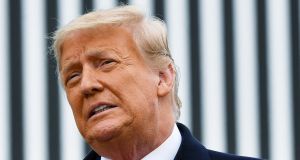 The invite for Donald Trump’s sendoff specifies that masks must be worn and that attendees are permitted to bring up to five guests. Photograph: Getty Images

Donald Trump has announced plans for an alternative presidential sendoff on the same day as Joe Biden’s inauguration.

The outgoing president has issued invites for an event taking place at Joint Base Andrews in Maryland at 8am on Wednesday – four hours before Mr Biden will take his oath in Washington DC.

Details of the ceremony are not yet clear, although attendees have been told to arrive by 7.15am. According to some reports, a 21-gun salute is under consideration, and officials are considering an elaborate event that would have the feel of a state visit. Mr Trump will then fly to Mar-a-Lago in his final use of Air Force One before the plane becomes at the regular disposal of Biden.

Invitations for the event have been circulated to Trump supporters, former administration officials and other backers. A smaller group of White House staff will see off Trump from the White House earlier in the morning on his journey to Joint Base Andrews.

Strict security arrangements in place for the inauguration, following the January 6th violence in Washington by a pro-Trump mob, have limited the number of people who can attend.

The invite for Mr Trump’s sendoff specifies that masks must be worn and that attendees are permitted to bring up to five guests. Late last year, Trump was criticised for hosting a series of indoor and outdoor events at the White House where social distancing and mask-wearing guidelines were not enforced, leading to several high-profile Covid cases, with the gatherings described as “superspreader” events.

In refusing to attend Mr Biden’s inauguration, Mr Trump becomes the first president in a century to choose not to be in attendance for his successor taking the presidential oath, marking the peaceful transfer of power. In 2017, Barack and Michelle Obama welcomed Donald and Melania Trump to the White House on the morning of the inauguration. The vice-president, Mike Pence, is expected to attend.

Mr Trump is ending his term with the lowest approval rating of his presidency. Polling for CNN at the weekend had his rating down at 34 per cent. His performance rating among Republicans has also dropped, down 14 points since October, standing at 80 per cent. – Guardian