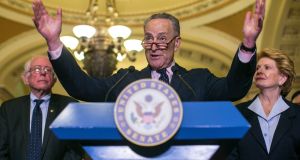 Senator Chuck Schumer, the Democrats’ senate leader has vowed to fight “tooth and nail” any Trump nominee for the supreme court who is not in the legal “mainstream”. Photograph: Al Drago/New York Times

Amid a raging furore over his border-closing order, US president Donald Trump will on Tuesday announce his choice to fill a supreme court vacancy.

“It will be announced live on Tuesday at 8pm,” Mr Trump tweeted as opposition to his immigration order mounted.

Both Republicans and Democrats are now digging in for all-out political combat.

The new president’s 2016 campaign promise to replace the late Justice Antonin Scalia with an ideological twin is credited with cementing Mr Trump’s support among conservative voters and elevating him to the White House. His Democratic opponents, meanwhile, are still fuming over the refusal of the Republicans last year to consider president Barack Obama’s nomination of Judge Merrick Garland for the vacant seat.

Mr Trump had originally planned to announce his pick for the court on Thursday.

The coming battle, to be waged on Capitol Hill and over the nation’s airwaves, is certain to deepen Washington’s bitter partisan divide.

While Republicans expect to push Mr Trump’s nominee through the senate, the fight ahead could complicate their plans for quick action on several legislative priorities. The repeal of Obamacare, tax reform, and funding for a wall along the US-Mexican border already crowd the congressional calendar.

“A prolonged battle over the supreme court has the potential to stall progress in the senate . . . and all but guarantee a massive brawl,” says Jim Manley, a Democratic strategist and former aide to Senator Harry Reid.

Republicans have 52 senators, but need 60 votes to end debate on a supreme court nomination. Senator Chuck Schumer, the Democrats’ leader in the senate, has vowed to fight “tooth and nail” any Trump nominee who is not in the legal “mainstream”. The court is currently divided evenly between conservatives, led by Chief Justice John Roberts, and liberals.

The president said last week that he would urge senate majority leader Mitch McConnell to use the so-called nuclear option and change the rules so that the nomination could go ahead with just 51 votes.

Four federal appeals court judges are reported to be the leading contenders for the nomination: Judge Neil Gorsuch (49), of Denver; Judge William Pryor (54), of Atlanta; Judge Thomas Hardiman (51), of Pittsburgh; and Judge Diane Sykes (59), of Milwaukee.

The nomination for Scalia’s seat, and the prospect of more high-court vacancies during the next four years, give Mr Trump a chance to leave his mark on the judicial branch at a time when Republicans already control the US Congress, the presidency and nearly two-thirds of state governorships.

For Republicans, securing a supreme court majority is part of a broader reshaping of the federal judiciary that will cement conservative dominance of American society long after Mr Trump retires. One of every eight seats on the federal bench is vacant and additional retirements are expected this year. Mr Trump thus can name 128 federal judges, more than any president at the start of his term since 1993.

Though the supreme court gets most attention, lower courts in the federal system are also influential. The high court only hears about 80 cases annually, while federal appeals courts hear more than 54,000. Many of those lower court decisions are the last word on critical legal questions.

“Getting constitutionalist judges into these positions is a very important task and an opportunity for President Trump to begin putting his imprint on the courts,” says John Malcolm, a former US Department of Justice official who is now with the Heritage Foundation.

Concerns over the future of the supreme court played a significant role in Mr Trump’s election. Among the roughly one-fifth of voters who said the court was the most important factor in their choice, Mr Trump beat Hillary Clinton by a margin of 56 per cent to 41 per cent, according to exit polls.

On Friday, vice-president Mike Pence previewed the supreme court selection in an address to people at the annual anti-abortion “march for life” on the Washington mall, saying the nominee “will uphold the God-given liberties enshrined in our constitution”.

Democrats are worried that Mr Trump will assemble a majority to overturn the decision in the landmark 1973 abortion-rights case, Roe v Wade. Mr Pryor, an associate of the attorney general-designate, Senator Jeff Sessions, has been especially outspoken on the subject. He has said that abortion is “morally wrong” and labelled Roe v Wade “the worst abomination in the history of constitutional law”.

Of the other leading candidates, Ms Sykes, the oldest of the group, is regarded as a dark horse because of her age. Mr Hardiman is said to enjoy the backing of the president’s sister, Judge Maryanne Trump Barry, who serves alongside him on a federal appeals court.