Donald Trump’s curious relationship with the US military

The French army band at the Bastille Day parade played a medley of French band Daft Punk's hits, including 'Get Lucky,' 'Harder, Better, Faster,' and others. 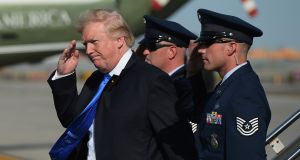 President Donald Trump saluting a military aide upon arriving at Newark airport in New Jersey. The president’s notion of hosting a military parade in Washington is a step too far for most. Photograph: Getty Images

Another week, another controversy in Washington, as Donald Trump continues to subvert all norms of presidential behaviour and take even his most steadfast supporters by surprise. However, it was not the stock market sell-off, the fear of another government shutdown, or the domestic-abuse scandal that saw one of the president’s key advisers leave the West Wing that grabbed most attention this week.

Instead it was reports, first carried in the Washington Post, that President Trump is planning a military parade this year. Within hours the White House had confirmed that preliminary preparations were indeed under way.

“President Trump is incredibly supportive of America’s great service members who risk their lives every day to keep our country safe,” press secretary Sarah Huckabee Sanders said. “He has asked the department of defence to explore a celebration at which all Americans can show their appreciation.”

Trump hit on the idea for the parade last July when he attended the Bastille Day military parade with President Emmanuel Macron in Paris. According to reports, he enthused about the display of military pomp and ceremony on his way back to the US on Air Force One. In his address to the United Nations in September the president also referenced the parade, suggesting it was something the US would consider.

In a terse press conference on Wednesday, defence secretary James Mattis confirmed his department had been preparing options for the White House.

America has long venerated its military, and respect for men and women in uniform is an important part of American national identity. It is not uncommon for veterans or military members to receive priority treatment when boarding flights within the US. Similarly, patriotic pageantry is a staple of sporting events, with NFL games often beginning by honouring military personnel and veterans.

Yet Trump’s idea for a military parade was a step too far for most. Even the most patriotic Republicans gave a lukewarm response. The Republican chair of the arms services committee, Mac Thornberry, politely suggested that resources would be better spent actually funding the military (this week’s budget negotiations which almost led to a shutdown were in part about increasing defence spending).

Republican senator John Kennedy was equally blunt. “America is the most powerful country in all of human history, everybody knows it, and we don’t need to show it off.”

Suspicions abound that Trump’s plan for a military spectacle is part of his ongoing virtual battle with the North Korean leader and another example of the president’s authoritarian tendencies. After all, this week Trump accused Democrats who did not applaud him during his State of the Union address of treason.

The idea that the US president is channelling his inner Kim Jong Un gives plenty of fodder for psychologists. But in reality, his plans for a military parade may say more about his own curious relationship with the military.

Since his inauguration Trump has exhibited an uncharacteristic respect for military men, surrounding himself in the West Wing with former generals. His first national security adviser, Mike Flynn, served in the army for more than 33 years. He worked in the White House for just over three weeks before being fired over his alleged links with Russian representatives.

Following a tumultuous summer and departure of key staff, Trump moved General John Kelly from his role as head of the department of homeland security to become White House chief-of-staff.

Expectations that the military presence might put some control on Trump’s tweeting patterns and more explosive comments have not been borne out, with the president maintaining his innovative approach to presidential tradition and clashing with Kelly publicly on one occasion over Kelly’s assertion on TV that the president did not really want a border wall with Mexico.

Trump also appointed retired general James Mattis, who had a 40-year career in the military, as secretary of defence. While Mattis is a highly respected four-star general and is often seen as one of the adults in the Trump room, the appointment was unusual.

As for the military parade itself, possible dates that have been floated are Memorial Day in May or July 4th

Under US law a civilian is supposed to lead the Pentagon, with those who have served in the military obliged to wait seven years before they can be appointed. The aim of the law, which dates back to 1947, is to dilute the power of the military given the enormous responsibility invested in the defence secretary.

Mattis, who was given a waiver, is only the second former general to lead the army.

The president’s direct experience of the military world is also intriguing. He attended New York Military Academy, one of the oldest military schools in the US, graduating in 1964. He then received his first draft deferment – one of five he was to receive, exempting him from service in Vietnam – citing bone spurs in his heels.

Trump’s draft record was the source of controversy during his presidential campaign and presidency. The issue resurfaced last year when Trump insulted the parents of a slain American Muslim soldier killed in Iraq, with the grief-stricken father Kzhir Khan accusing the president of sacrificing “nothing”.

As for the military parade itself, possible dates that have been floated are Memorial Day in May or July 4th.

An event to specifically mark the centenary of the end of the first World War in November has also been quietly mentioned – an opportunity to ensure that the parade is more about the collective Allied victory than any specific association with Trump.

The last big military parade in Washington took place in 1991 to mark the end of the Gulf War. Some 27 years later, the rationale for another parade is not entirely clear.

With US troops still stationed in Iraq and Afghanistan – a conflict now in its 17th year – now may not be the time to tout America’s military prestige.