Democrats proceed with impeachment in bid to oust Trump

US President-elect Joe Biden received his second and final dose of the Pfizer Inc COVID-19 vaccine on Monday at a hospital in Newark, Delaware. Video: Reuters 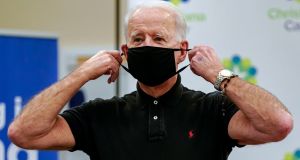 Joe Biden: “I am not afraid to take the oath outside, and we’ve been getting briefed.” Photograph: Amr Alfiky/The New York Times

House Democrats initiated impeachment proceedings against president Donald Trump on Monday, formally introducing an article of impeachment to the House of Representatives.

The resolution accuses Mr Trump of inciting insurrection ahead of last Wednesday’s storming of the US Capitol by his supporters.

“Donald John Trump engaged in high crimes and misdemeanours by inciting violence against the government of the United States, ” the article states. It adds that the president “wilfully made statements that, in context, encouraged – and foreseeably resulted in – lawless action at the Capitol”.

In a co-ordinated move, the House also introduced a resolution calling on vice-president Mike Pence to invoke the 25th amendment to the constitution, which allows for the removal of a sitting president. House majority leader Steny Hoyer introduced the resolution, but Republicans blocked it as expected. It will now go to the full House on Tuesday, though a vote is not expected until late Tuesday evening.

House speaker Nancy Pelosi gave Mr Pence 24 hours to invoke the 25th amendment, or the House will move forward with impeachment proceedings. This would likely mean a vote on the impeachment article on Wednesday, which is expected to pass, resulting in Mr Trump becoming the first president in history to be impeached twice.

Amid debate within the Democratic party about when to send the impeachment article to the Senate for a trial, president-elect Joe Biden suggested on Monday that the Senate could divide its activity, splitting its days into impeachment and non-impeachment business.

“I haven’t gotten an answer from the parliamentarian yet,” he said, referring to Congress’s top authority on parliamentary procedure.

Some Democrats are concerned that the first weeks of the Biden presidency could be bogged down in an impeachment trial, which would prevent Mr Biden implementing his agenda and securing Senate confirmation for his cabinet nominees.

Mr Biden, who was speaking after he received his second coronavirus vaccine injection, also said that those responsible for last week’s rioting should be held accountable.

“I think it’s critically important that there be a real serious focus on holding those folks who engaged in sedition and threatened people’s lives, defaced public property, caused great damage – that they be held accountable.”

Washington is continuing to reel from last week’s attack on the Capitol. On Monday, a member of Congress, Bonnie Watson Coleman, said that she had tested positive for Covid-19 having been exposed to someone infected with coronavirus while sheltering in place during the attack.

At a press conference, Washington’s mayor Muriel Bowser defended her police force’s handling of the riot, and confirmed that she had requested assistance from the department of homeland security and a daily threat and intelligence briefing from the FBI ahead of the inauguration.

Up to 15,000 members of the national guard from across the country could be sent to Washington by inauguration day amid fears that far-right groups could be planning an attack.

The Biden team revealed more plans for the January 20th celebration on Monday, including a display of hundreds of thousands of flags along the National Mall which “will represent the American people who are unable to travel to Washington” due to the pandemic.

In addition, one of Mr Biden’s first acts as commander-in-chief will be to lay a wreath at the tomb of the unknown soldier at Arlington Cemetery. He will be joined by former presidents Barack Obama, Bill Clinton, George W Bush and their spouses, but not Mr Trump who has refused to attend the inauguration.

Asked if he felt secure enough to attend the January 20th inauguration outside in the spot where rioters breached the Capitol last week, Mr Biden answered in the affirmative. “I am not afraid to take the oath outside, and we’ve been getting briefed,” he said.