Arnold Schwarzenegger has denounced last week's attack on the US Capitol, calling Donald Trump the "worst president ever" and comparing the events to 1938's Kristallnacht, or the Night of Broken Glass, which marked the rise of Nazi Germany. 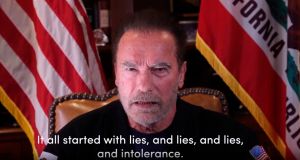 Hollywood actor and former California governor Arnold Schwarzenegger has compared the storming of the US Capitol by supporters of president Donald Trump to Nazi violence against Jews in a deeply personal video posted on Twitter.

Schwarzenegger, a Republican Party member and long-time critic of Trump, likened the siege at the Capitol Building last week to Kristallnacht, or the Night of Broken Glass, when Jewish-owned businesses and institutions were destroyed by the Nazis in 1938 and dozens were killed.

“They did not just break down the doors of the building that housed American democracy. They trampled the very principles on which our country was founded,” he said in the video published on his official Twitter account on Sunday.

He also compared American democracy to a weapon he wielded onscreen in the loincloth of Conan the Barbarian nearly 40 years ago, saying: “ Our democracy is like the steel of this sword. The more it is tempered, the stronger it becomes.”

My message to my fellow Americans and friends around the world following this week's attack on the Capitol. pic.twitter.com/blOy35LWJ5

“I’m not telling you this because you become an expert swordmaker. But our democracy is like the steel of this sword. The more it is tempered, the stronger it becomes.”

Drawing on his childhood experiences in post-war Austria, Schwarzenegger warned against the threats to democracy from lies and intolerance, and cautioned against mainstream complicity.

“Now I grew up in the ruins of a country that suffered the loss of its democracy . . . Growing up, I was surrounded by broken men drinking away the guilt over their participation in the most evil regime in history,” he said.

“Not all of them were rabid anti-Semites or Nazis. Many just went along, step by step, down the road. They were the people next door.”

Schwarzenegger (73) who started out as a bodybuilder before reaching worldwide fame through his roles in films such as The Running Man and Predator, revealed he had domestic violence at the hands of his father.

“Now, I’ve never shared this so publicly because it is a painful memory. But my father would come home drunk, once or twice a week, and he would scream and hit us, and scare my mother,” he said.

Schwarzenegger said Trump, who would be remembered as the worst president in US history, had “sought a coup by misleading people with lies”.

The actor urged Americans to put aside their political beliefs and heal together. –Reuters and Guardian