Hancock says UK on track for 15m vaccinations by mid-February 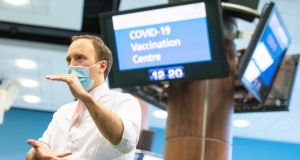 Britain is on track to vaccinate almost 15 million people by mid-February, but the coronavirus pandemic will become worse before then, health secretary Matt Hancock has said.

Under a vaccine delivery plan published on Monday, almost 1,500 sites will offer vaccinations to the over-70s, older care home residents and staff, frontline healthcare workers and the clinically extremely vulnerable.

“We are on track to meet that target. It is an ambitious, stretching, but achievable target, but I am confident we are going to do it,” he told a press conference in Downing Street.

The UK, which was the first country in the world to approve a coronavirus vaccine, has already vaccinated 2.3 million people, more than all EU member states combined.

The groups due to be vaccinated first account for 88 per cent of coronavirus deaths, but Mr Hancock suggested that vaccinating all those over 60, who include many of those hospitalised, could be the trigger for easing social distancing restrictions.

Britain recorded 46,169 new cases and 529 deaths on Monday, and Boris Johnson warned that rising hospital admissions were putting massive strain on the health service. He said Britain was in a perilous position as some hospitals reported oxygen shortages as they treated a record number of coronavirus patients.

“It’s a race against time because we can all see the threat that our NHS faces, the pressure it’s under, the demand in intensive care units, the pressure on ventilated beds, even the shortage of oxygen in some places,” he said.

“The worst thing now for us is to allow success in rolling out a vaccine programme to breed any kind of complacency about the state of the pandemic.”

Mr Hancock said the government would consider tightening lockdown restrictions if compliance with the rules did not improve. He said that people were allowed to exercise with one other person but that they should not use that time to socialise.

But he dismissed speculation that support and childcare bubbles, which were introduced last summer after the first lockdown, could be abolished.

“I know how important they are to people, and they are an important part of the system. We have go to support people. If there is someone in your bubble, you are essentially part of the same household.”

Labour leader Keir Starmer called for an immediate tightening of the restrictions, and said the government should support people by ruling out council tax increases and benefit cuts, extending a ban on evictions and giving key workers a pay rise.

“The indecision and delays of the prime minister cost lives and they cost people’s jobs,” he said.

“The British people will forgive many things. They know the pandemic is difficult. But they also know serial incompetence when they see it – and they know when a prime minister simply isn’t up to the job.”