A spontaneous snowball fight broke out on a Madrid street on after heavy snowfall from Storm Filomena brought the city to a standstill. Video: Reuters / Deirdre Carney / Jorge Meis 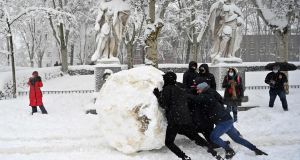 A celebratory conga or a noisy rendition of La Macarena in the streets of Madrid would normally not be cause for comment in what is one of Europe’s noisiest capitals. But these are far from normal times.

As the Spanish interior saw its heaviest snowfall for decades over the weekend, the response was a combination of deep concern over collapsed transport links and the dangers posed by the cold – and euphoria at the novelty of it all.

Storm Filomena left thousands of drivers around the country stranded in their vehicles as roads were blocked, while Madrid airport and many rail services were temporarily shut down. Meanwhile, school and university attendance in the capital has been suspended at least until Wednesday as the snow remains piled up and streets iced over due to plummeting temperatures.

But despite the chaos, in central Madrid many local residents gathered at the weekend to make the most of the snowfall. Some were spotted skiing along Gran Vía, past the street’s plethora of clothes retailers, while footage of a man being pulled on a sled by five huskies through the capital’s Hortaleza district went viral.

Such scenes drew good-natured amazement. But with concerns about Covid-19 still rife, others were condemned for letting high spirits get the better of them.

In Callao square, several dozen people, many of them not wearing face masks, took part in a massive snowball fight. Nearby, in Puerta del Sol square, a daytime snow-rave took place, with people dancing to 1980s pop anthem A Quién le Importa? (Who cares?) and performing the now-notorious conga and Macarena. Needless to say, social distancing was not observed.

“Young people in Puerta del Sol and Callao this afternoon in Madrid, singing Who cares?” responded one of many outraged onlookers on Twitter. “High-risk people care. So do healthcare workers. And ambulance workers. And other ill people who can’t be treated due to saturation [of the healthcare system].”

Criticism of those who fail to resist the siren song of the snow outside is sharpened by the fear that the third wave could be just about to break. Last year Spain was among the first countries to feel the force of the first and second waves of Covid-19. Since autumn the country has been under a national state of emergency, with restrictions being introduced and withdrawn at the discretion of local governments.

Although total cases have surpassed two million and Covid-related deaths have topped 51,000, daily infections and deaths have been below those of Italy, Germany or the UK in recent weeks. The worry now is that the string of festivities and holidays Spaniards have had over the past month have fomented coronavirus’s spread while preventing its true impact from showing in official figures. The coming weeks are therefore expected to reveal the full extent of the third wave.

The cold snap has also underlined longstanding concerns about Spain’s inequality. Four people died over the weekend due to the conditions, one of them a homeless man in Madrid. Meanwhile, about 4,000 inhabitants of La Cañada Real, a large shanty town in the south of the capital, have had to endure the cold without electricity, due to an energy blackout in the area that has already lasted three months.

The conservative regional government of Madrid has promised to distribute gas heaters in the area and has accused the leftist deputy prime minister, Pablo Iglesias, of “negative populism” for demanding emergency action by energy company Naturgy to resolve the problem.

Perhaps predictably, Spain’s freakish meteorological conditions are showing signs of becoming yet another political battlefield, polarising and embittering public debate as effectively as coronavirus has been doing for the past 10 months.

A few weeks ago hopes had been raised that a new initiative aimed at taking the sting out of Spain’s poisonous political discourse might succeed. Roberto Uriarte, of the leftist coalition Unidas Podemos, had presented the idea to introduce “an element of amiability” into parliamentary debate. However, earlier this month, the conservative Popular Party and far-right Vox opted out of the plan, suggesting the gloves will remain off.

Spaniards at least have the knowledge that the cold spell will come to an end within days – possibly by the end of this week. The bad news is that the development of Covid-19 is much less certain.

Filomena may have moved on. But Spain is now bracing itself for a much more deadly storm and all the political rancour that will undoubtedly bring.