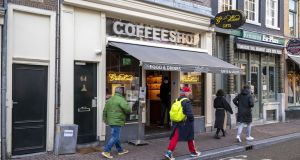 A coffee shop in the centre of Amsterdam, the Netherlands. Photograph: Evert Elzinga/EPA

A total ban now seems inevitable on overseas tourists using Amsterdam’s “coffee shops” where cannabis can be bought and consumed legally – following agreement on a clean-up plan between the city’s mayor, the police, and the public prosecutor’s office.

The ban has been discussed for more than a decade, but despite a gradual drop in the number of coffee shops in the capital from 283 to 166, sales have actually increased rather than fallen, with foreigners visitng them a remarkable 1.5 million times every month.

Since the start of the Covid-19 pandemic, however, GreenLeft mayor Femke Halsema, in co-operation with long-term residents, business groups, tourist interests and the city’s ombudsman, has been drawing up a plan to loosen the grip of the notorious sex and drugs industries.

“We’re absolutely not envisaging a cannabis-free Amsterdam, because coffee shops are part of the city’s history,” Halsema said. “Even so, there’s no desire anymore for the kind of tourism where gangs of youngsters are throwing up in the canals because they’ve indulged too much.”

So as well as “reducing the pulling power of cannabis”, the city council has been reducing the number of licensed prostitution windows in the red-light district, has banned Airbnb-type short-term apartment rentals in three central districts, and is cracking down on petty criminality.

The aim, says ombudsman Arre Zuurmond, is to end the nuisance created by partying tourists turning tiny residential streets into what critics describe to him as “an inadequately policed jungle”.

Part of the appeal of the latest blueprint is that it makes the case that any revenue lost from sex and drugs tourism can easily be replaced by less raucous cultural tourism. Many fans of Amsterdam’s art galleries, museums and music venues, for instance, are allegedly put off by its reputation.

“I’ve seen tourists sleeping in their cars, peeing from the windows, leaving all their rubbish behind – and, of course, buying so many drugs when they leave that they’ll make a profit back home,” says Robert Overmeer, a businessman who launched the Stop Drugs Tourism petition.

“We don’t want these people. They don’t even see the city. They’re stoned all the time.”

However, a spokesman for coffee shop owners warned against easy solutions.

“Demand for soft drugs won’t go away because regulated coffee shops are off-limits. Tourists will still come here but they’ll buy on the street. Anyone who knows drugs will tell you which is more dangerous.”