Maureen Dowd: What happened in Washington on Wednesday was a heartbreaking disgrace 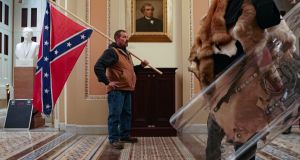 A supporter of Donald Trump carries a Confederate battle flag inside the Capitol building in Washington on Wednesday. Photograph: Erin Schaff/New York Times

Even as a small child, I knew I was seeing something tremendous. I didn’t know that the light in the dome meant that Congress was in session. I didn’t know that the statue with the feathered headdress on top was not a Native American but a goddess of freedom. I only knew that we were driving down Pennsylvania Avenue at night to pick up my father from work at a gleaming shrine.

His job was to guard it. We thought of that as the family business: keeping the Capitol safe. We all worked there during summer breaks. My two oldest brothers, Michael and Martin, were pages in the 1950s. Peggy and Kevin worked in the mailroom. Later, I was an intern to a congressman from Syracuse.

Every time I walked the marble halls, a star-struck 17-year-old, I thought to myself: This is where my father walked when he protected the Capitol. We brimmed with reverence, even through moments of irreverence.

Michael had to pull a brass spittoon off the foot of an inebriated senator, and Martin had to lie to wives of senators about where their husbands were. My brothers’ page duties included fetching water for Prescott Bush, delivering mail to Richard Nixon, checking if JFK wanted the top of his red-and-white convertible put up when rain threatened, and seating Jackie Kennedy in the visitors’ gallery.

My sister has a room dedicated to pictures of us, beaming on the same Capitol steps desecrated a few days ago, as well as paintings and replicas of the Capitol. For the last 13 of his 40 years on the DC police force, my dad was a plainclothes detective in charge of Senate security. He oversaw eight other detectives. The Capitol Police was a separate, smaller agency then, more like security guards.

“Captain Mike,” as he was known, loved that job, and Hill denizens loved him, and his brogue. He had a small office on the east side of the building right inside the door, near where the mob swarmed Wednesday. He had a bad memory for names, so men were always called “Big Shot”.

My mom told me about the terrifying hours on March 1st, 1954, when Puerto Rican nationalists invaded Congress and fired round after round down from the spectators’ gallery above the House floor. Five congressmen were wounded. My father raced over from the Senate and wrested a .38-calibre pistol from one of the shooters. My mother stood frozen in our house, waiting for news.

My dad marked the man’s gun by carving his initials with a penknife on the handle. At the trial, when the defence lawyer superciliously grilled Mike Joseph Dowd about how he could be sure that the gun in evidence was the same one used in the crime, Dad told him to look on the bottom of the handle. There was the “MJD”.

He respected politicians based on their humanity, not their ideology. Donald Trump’s inhumanity, his sick torrent of lies and incitement, came to its inevitable, shameful end on Wednesday, when a mob smeared blood, excrement, hate and death all over the Capitol.

At least Trump put my conservative siblings and me on the same page for once. We agreed – seeing the mob crash in; seeing lawmakers fearing for their lives, crouching and hiding and making calls to plead for the cavalry to come from any of the myriad federal and local police forces here, as Confederate flags waved– that this was a heartbreaking disgrace. It would have enraged my father.

Not only was a Capitol policeman killed after being hit by a fire extinguisher, the entire security apparatus meant to protect our democracy failed. Was the pathetic response to the anarchy engineered by Trump? It would not be the first time he sabotaged the government he was running. He was not even moved to protect his own lickspittle, the vice-president, who was in the chamber when it was attacked.

In New York, Donald Trump was a corrupt Joker who took cudgels to the historic friezes on Bonwit Teller. In Washington, he became something evil. He took cudgels to history itself, to our institutions, decency and democracy.

He draped his autocratic behaviour in the American flag. Surrounded by Lincoln, Washington, Jefferson, FDR, MLK and monuments to our war dead, this coward whipped up a horde of conspiracists, white supremacists, neo-Nazis and gullible acolytes to try to steal an election for him. He said he would march to the Capitol with them, but he didn’t, of course. He watched his insurrection on TV, like the bum that he is.

Donald Trump is ruined, along with his repellent family. Even Twitter had finally had enough, suspending its leading arsonist after allowing him to fan the flames for years. The House might well impeach him, and he deserves it, though the Senate might not have the time or inclination to toss him out.

Josh Hawley’s political future evaporated in a cloud of tear gas, and Ted Cruz reinforced why everyone hates him. Only two days after the Trump mob followed orders to engage in seditious “trial by combat”, as the execrable Rudy Giuliani put it, the White House put out a statement: “As President Trump said yesterday, this is a time for healing and unity as one Nation.”

We will heal, once the rough beast in the White House slouches off. Something wicked this way goes. – New York Times