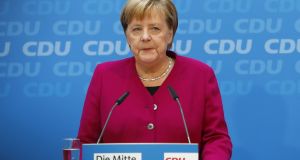 It doesn’t take long to summarise what has happened since, exactly a year ago, Germans elected a new federal government.

The word doing the rounds in Berlin – Nabelschau (navel-gazing) – has forced a chastened Angela Merkel into mea culpa mode.

“It is important that we now solve the problems of the people,” she told reporters on Monday, not for the first time. “I regret very much that all this was allowed to happen.”

Ostensibly the latest row was about whether Germany’s domestic intelligence chief, Hans-Georg Maassen, crossed a line when he contradicted Merkel – and fanned right-wing conspiracy theorists – by casting doubt on claims that a stabbing in eastern Germany had sparked vigilante attacks on immigrants.

What should have been a two-day kerfuffle instead, at the hands of edgy Berlin coalition partners, escalated into a three-week power play.

The SPD demanded Maassen’s resignation while Merkel’s Bavarian CSU allies defended him. Trapped in the middle, the chancellor hoped promoting him out of harm’s way – into the interior ministry with a tidy pay rise – would solve the problem.

Instead it was a classic case of verschlimmbessern – making something worse, not better.

On Sunday evening, at yet another emergency coalition meeting, leaders created a new position for Maassen, on the same salary, in an attempt to minimise the impression that they are out of touch.

Dr Merkel admitted on Monday she had focused “too much on functionality and processes . . . and not enough on what concerns people”.

Most Germans don’t care about the domestic intelligence chief. They care about whether they can still afford an apartment today, or drive to work tomorrow.

Seven years after the euro crisis sparked a run on German property, the Merkel government is only now waking up to the growing housing crisis. And three years after Volkswagen’s diesel fraud was revealed, Berlin is still asking rather than telling the car industry to finance an emissions fix before breaches of EU air pollution laws see millions of diesel drivers banned from city streets.

Managing rather than leading, the chancellor seemed strangely disconnected as a three-week row raged over a civil servant.

For the SPD it was payback for the last crisis in July, when the CSU pushed the coalition to the brink over asylum policy. That row, like this one, was more about optics than substance: it came as the CSU is fighting a losing battle to retain its absolute majority in next month’s Bavarian state election.

Angela Merkel has been gentle with her prickly Bavarian allies, knowing a bad election result could make them even less predictable in Berlin.

All the while the far-right Alternative für Deutschland (AfD) has watched in silent fascination as coalition squabbles repel frustrated voters into their camp, making them Germany’s second-largest party.

Spooked SPD left-wingers say the endless rows in Berlin confirm their fears about the high political cost of returning for a third grand coalition. Unless matters improve by this time next year, they demand that SPD leaders invoke a midterm exit clause in the grand coalition agreement.

Over in Dr Merkel’s own Christian Democratic Union (CDU), a test of unrest comes on Tuesday when its Bundestag MPs choose a new parliamentary party leader. They may re-elect the incumbent, as preferred by Merkel – or they may back a rival candidate. Choosing the latter could, in turn, embolden young conservative figures to elect a new leader and frontbench when the CDU meets in conference next December.

The question no one dares ask – yet – is this: is it time to call time on Angela Merkel and her trusted “small steps” approach of incremental, tactical politics?

After largely symbolic summits on housing and diesel emissions, some wonder if her small-steps approach is appropriate for the big challenges of post-Brexit, Trump, populism and integrating refugees.

With trust trickling away, Dr Merkel’s insistence on Monday that her coalition will get down to work – a year late – sounded less like an order and more like a plea.