Actor and singer Debbie Reynolds has died, barely a day after the death of her daughter Carrie Fisher. Video: Reuters 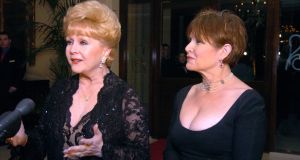 A handout photograph made available by the Las Vegas News Bureau shows US actresses Debbie Reynolds (L) and daughter Carrie Fisher (R) arriving at The Ritz-Carlton Lake Las Vegas in Henderson, Nevada in 2007. 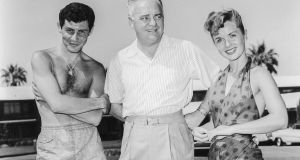 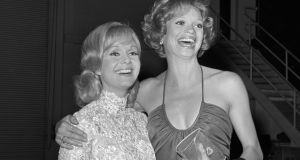 A handout photo made available by the Las Vegas News Bureau shows US actresses and singers, Debbie Reynolds (L) and Juliet Prowse (R) at the Desert Inn in Las Vegas, Nevada, USA in April 1974.

Actor and singer Debbie Reynolds has died, barely a day after the death of her daughter Carrie Fisher.

The 84-year-old Singin’ In The Rain star died on Wednesday, her son Todd Fisher said, saying: “She’s now with Carrie and we’re all heartbroken.”

She suffered a suspected stroke and emergency services were called at 1pm local time on Wednesday to her son’s Beverley Hills home, where they were making plans for Fisher’s funeral, according to Tmz. com.

Actor and director Mr Fisher (58) speaking outside Cedars-Sinai Medical Centre where Reynolds was taken by ambulance, said the stress of his sister’s death on Tuesday at 60 “was too much” for their mother.

Carrie Fisher, who rose to fame for her role playing Princess Leia in Star Wars, died in hospital days after suffering a heart attack on a transatlantic flight from London to Los Angeles.

Reynolds was just a teenager when she landed a role in the 1950 film Three Little Words, for which she was nominated for a most promising newcomer Golden Globe.

She was perhaps most famous for playing Kathy Selden in 1952 musical Singin’ In The Rain alongside Gene Kelly. 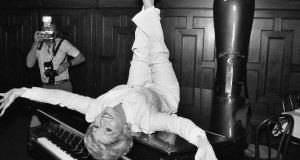 Debbie Reynolds: A life in pictures

Debbie Reynolds together again with her daughter Carrie Fisher... pic.twitter.com/PfkgDL7ga1

Her first of three marriages was to musician Eddie Fisher in 1955 and with him she had Carrie and Todd.

But their relationship ended sourly after news emerged of his affair with movie star Elizabeth Taylor.

Reynolds continued to have a loving relationship with her ex-husband’s children, including Joely Fisher (49) who tweeted “God speed mama” after she was taken to hospital.

Debra Messing, who played Reynolds’ on-screen daughter in Will & Grace, was among the stars who paid tribute to her on social media.

Ms Messing wrote on Instagram: “Debbie went to be with Carrie. She always worried about her. Carrie left too soon and now they are together again.”

William Shatner wrote: “Debbie Reynolds was one of the last of Hollywood Royalty. It breaks my heart that she is gone. I’d hoped that my grieving was done for 2016.”

His fellow Star Trek actor George Takei added: “There is nothing harder than having to bury a child. Debbie died of a broken heart, but she’s with her daughter now.”

Reynolds had paid an emotional tribute to her daughter on Facebook.

She wrote: “Thank you to everyone who has embraced the gifts and talents of my beloved and amazing daughter. I am grateful for your thoughts and prayers that are now guiding her to her next stop. Love Carrie’s Mother.”

Carrie Fisher captured the hearts of a generation of young men as the blaster-toting, bikini-wearing princess and tough resistance leader in the three original Star Wars films.

But off screen she battled drink, drugs and mental illness and later emerged as a widely-lauded mental health advocate who inspired others by writing about her struggles.

In 1987 she published her semi-autobiographical novel Postcards From The Edge about a recovering drug addict film star. It became a bestseller and was turned into a 1990 film starring an Oscar-nominated Meryl Streep, Shirley MacLaine and Dennis Quaid.

She wrote and performed in an autobiographical one-woman show, Wishful Drinking, which went to Broadway and was turned into a book.