Trump won the presidential election with the most unconventional campaign ever 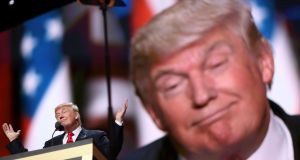 Everything you knew, or thought you knew, was wrong.

That was the postmortem on America’s political class after businessman Donald Trump, the most unconventional presidential candidate in US history, proved how out of touch east-coast political and media elites were with everyday people.

Trump ripped up the rulebook of US politics, bullying and deriding his way to the White House. He targeted people based on religion and race. He mocked women’s appearances and a disabled reporter.

He spouted falsehoods, peddled conspiracy theories and even questioned the legitimacy of the election process.

He picked fights with a Republican war hero, a beauty queen and the Muslim-American parents of a fallen US army captain.

He defended the size of his manhood in a televised debate and dismissed old boasts caught on camera – of grabbing women by their genitals because of his fame – as “locker room banter.”

All this did little to hurt the standing of a bombastic property mogul-turned-television personality among less educated white voters fed-up the political status quo and broken promises of career politicians.

Sure, Trump was flawed, but they saw him as authentic, and his spontaneity and swagger as a breath of fresh air.

The thrice-married son of a rich property developer from Queens, who lived an opulent and garish celebrity life in a Manhattan skyscraper, became the unlikely hero to millions of working-class Americans.

His surrogates called him the oxymoronic “blue-collar billionaire” and his supporters loved him for it.

In the process, he ended two dynasties that had dominated American political life for three decades and upended long-standing Republican policies on trade and foreign policy developed over decades.

Not bad for a one-time Democrat, Independent and Reform Party member-turned-Republican.

It was the nastiest and strangest election, won by an outsider, a populism-stroking demagogue and political chameleon whose anti-establishment appeal and brash hucksterism prospered among the basest instincts of an angry electorate looking for someone else to blame.

His sales pitches to build a wall along the border with Mexico or ban Muslim immigrants were like snake oil to a baying crowd and brought election politics into dangerous, divisive new territory, emboldening white supremacists and others on the “alt-right”.

His supporters dismissed accusations of xenophobia, racism, Islamophobia, sexism and non-presidential temperament against their candidates as the taunts of opponents rattled by a non-politician who was finally saying things that needed to be said.

To them, Trump fought against the forces of political correctness.

He fired up the white majority with a pledge to “make America great again”, capturing their sense of displacement in a globalised economy that had stolen industrial jobs from their blue-collar states and alienation at being left behind by the rapid social, cultural and racial changes in the country.

Trump painted a dark, dystopian picture of a divided America, a country in crisis, being overrun by illegal immigrants, pillaged by outsiders and foreign countries, and suffering an epidemic of crime.

It was at odds with reality but this was an election of the gut and his visceral proclamations rather than his policy prescriptions won over middle-class voters who enthusiastically jumped aboard the “Trump Train”.

His message against the forces of international trade and globalisation was simple and effective: Mexico and China had robbed the US of jobs and he would get them back.

“I alone can fix it,” he pronounced.

The enthusiasm was there early on: from the rundown steel and coal towns of Pennsylvania and Ohio to the beach communities of central Florida and the farms of Iowa, Trump drew big crowds.

Clinton, in contrast, brought out the sensible moms excited by her experience and, later, by the candidate she was not.

She ran a lacklustre campaign hampered by a sense of entitlement and decades of political baggage that she could not shake.

Her defensive posture became more pronounced in the face of Russian hackers dumping damaging hacked emails and the reheating of a FBI investigation into her emails.

In her closing arguments, the strongest case she could make was that she was not Trump. It proved not to be enough.

That she lost white women (by 43 to 52 per cent) and white college graduates (45 to 48 per cent) to a misogynist who had no experience of government or public office showed the extent of her unpopularity.

He bragged about tapping a silent majority but, in the end, it was an angry minority that sealed his victory.

Trump could not win a majority or even a plurality of votes in the November 8th election.

Clinton won the popular vote by almost three million votes but Trump had a 800,000-vote edge in the all-important swing states, securing the White House decisively in the state-weighted electoral college.

Despite the resources and political expertise at hand, Clinton forgot the basics: you have to campaign everywhere, repeatedly.

Flying everywhere in his own jet, dubbed Trump Force One, Trump blew a hole in the so-called blue wall of 18 states which had swung Democrat since 1992 – dislodging Pennsylvania, Michigan and Wisconsin from the opposition.

In these states, a combined tally of just 77,000 votes separated Clinton and the White House.

Her loss came with the fracturing of Barack Obama’s winning coalition, shedding millennial, Latino and black voters, and failing to run up enough urban and suburban votes to offset Trump’s red wave.

Just 22 days away from taking power, Trump is preparing to surround himself with billionaires, climate change deniers and oil industry wallahs at his cabinet table as he threatens to dismantle Obama’s legacy: environmental regulations, immigration reforms, a healthcare act that helps the poor and sick secure affordable insurance, a liberal jurisprudence and agreements with old foes, Iran and Cuba.

Trump shook up the US political system on his scorched-earth path to the White House.

Now, America’s greatest ever salesman and showman appears intent on doing the same with government.