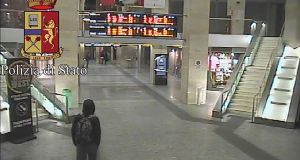 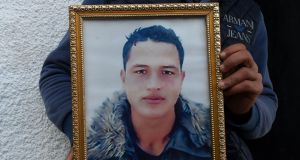 Walid Amri (at back), poses in recent days with a portrait of his brother, Anis Amri (24), the prime suspect in Berlin’s deadly pre-Christmas truck attack. File photograph: Fethi Belaid/AFP/Getty Images

A 40-year-old Tunisian man has been detained as a possible accomplice of Anis Amri, the man identified as the terrorist who carried out the truck attack on a Berlin Christmas market that killed 12 people, German officials said on Wednesday.

The Tunisian was held in Berlin, news agencies reported, after a search of a home and offices associated with the man, whose name had so far not been released.

Information about him was found in the mobile phone of Amri, a 24-year-old Tunisian, who was killed on Friday during a shootout with police officers outside Milan.

The development on Wednesday was announced by the office of Peter Frank, the public prosecutor general, which is based in Karlsruhe.

“The investigations indicate that he could have been involved in the attack,” Mr Frank’s office said in a statement, adding that officials expected to know by late Thursday if there were enough grounds to press criminal charges.

“To what extent suspicions about the arrested person will be firmed up remains to be seen, after further investigation.”

The truck attack, on December 19th, was Germany’s deadliest terrorist attack in decades.

Islamic State claimed responsibility and released a video that Amri had recorded, in which he pledged his allegiance to the group’s supreme leader.

It is not known if Amri had accomplices. Nor is it clear precisely how Amri made his way back to Italy, where he lived from 2011 to 2015.

Italian and French officials have said Amri most likely travelled by train on the evening of December 22nd from Lyon, France, transferring trains at the town of Chambéry, near the border with Italy, before making his way to Turin and then Milan.

From Central Station in Milan, he went to the northern suburb of Sesto San Giovanni, where two police officers on a routine patrol stopped him early Friday morning and asked for identification - Amri opened fire and was fatally shot.

How Amri reached Lyon from Berlin remains unclear, but Agence France-Presse, citing unidentified Dutch officials, reported on Wednesday that he took a bus from Amsterdam or the Dutch city of Nijmegen to Lyon on December 21st, two days after the attack.

“The suspect in the Berlin attack was very likely at the Nijmegen station two days after the attack,” Wim de Bruin, a spokesman for the Dutch national prosecutor’s office, said in a statement on Wednesday.

In a phone interview, he said officials believed Amri obtained a free mobile phone SIM card in Nijmegen that Italian police found on his body after he was killed.

De Bruin said the police were following up on reports from people who thought they might have seen Amri. “We have to investigate the reports because we would like to reconstruct the route he took in the Netherlands to get from Germany to France,” he said in the interview.

He added that investigators were working closely with their counterparts in Germany, France and Italy.

Amri is said to have careened into a Christmas market at the symbolic Kaiser Wilhelm Memorial Church in Berlin just after 8pm on December 19th.

Police initially detained a Pakistani man who was found to have no connection to the truck and thus the assault.

The error ended up giving the suspect a head start of almost 20 hours to flee, before investigators scouring the cab found a migration document that led to Amri.

Amri, who had a history of petty crime and used several aliases in his odyssey around Europe, applied for asylum in Germany in April. His application was rejected in June, and he was ordered to be deported, but he managed to slip through the cracks.

He may have benefitted from Germany’s decentralised political system.

Power is spread over 16 states, and police, judicial and migration officials have distinct spheres of authority.

For example, Amri was detained for two days in the southern German town of Friedrichshafen on July 30th, after trying to take a bus to Zurich, when police noticed he was under deportation order.

But an office for registering foreigners in Kleve, in the far northwest of Germany, which was responsible for the order, said it did not have the papers from Tunisia necessary to carry out the deportation, so Amri was ordered released.

Adding to the confusion, on leaving jail in the south, he gave an address in Karlsruhe, in the southwest - hundreds of miles from Kleve.

This jumbled state of affairs - a reaction to the abuses of centralised power under fascist and communist governments - has frequently been criticised, and with the new focus on terrorism, both politicians and ordinary Germans are again clamouring for change.

In France, which has a fairly strong central government but is also struggling with terrorism, a 29-year-old man was arrested on Tuesday morning in a police raid at his home in Cugnaux, near Toulouse in the country’s southwest, on suspicion that he had been planning an imminent terrorist attack, officials said on Wednesday. His name was not disclosed.

Jean-Marc Falcone, the head of the national police, told the French newspaper Le Journal du Dimanche that France remains under “high” threat of another attack, and that the Berlin attack “confirms that a heavy set of security measures, both active and passive, has to be put into place around mass gatherings”. New York Times