Russo-Turkish ceasefire in Syria could be game-changer

Three powers, including Iran, prioritise end to hostilities and preserving Syria as a state 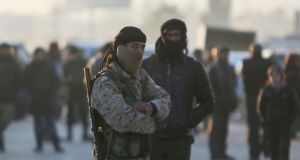 Armed Syrian fighters evacuated from the embattled Syrian city of Aleppo during the ceasefire arrive at a refugee camp in Rashidin, near Idlib, Syria, before Christmas. Photograph: AP Photo

The Russo-Turkish ceasefire throughout Syria, set to come into force last night, could be a game-changer if implemented, and could lead to political negotiations in the Kazakh capital Astana, sponsored by Moscow and Ankara.

The potential game-changer is the addition of Turkey to the Russian-Iranian alliance on Syria. A sign that Turkey has made a significant shift is Thursday’s planned meeting in Ankara between Russian military officers and Syrian rebel leaders with the aim of achieving an agreement on the ceasefire.

Turkey has also agreed to exclude not only Islamic State from the ceasefire, but also al-Qaeda’s Jabhat al-Sham (formerly Jabhat al-Nusra). Turkey, Saudi Arabia and Qatar have been the chief supporters of the latter group even though, along with Islamic State, it has been designated a terrorist organisation.

Turkey remains a prime mover in the camp seeking the ousting of Syrian president Bashar al-Assad, while Russia and Iran continue to be his staunchest allies and defenders. Although they retain key differences over Assad, the three powers appear to have given priority to bringing an end to hostilities and preserving Syria as a state.

The three foreign ministers who met in Moscow on December 20th agreed Syria’s sovereignty, unity, territorial integrity, independence and pluralism should be ensured, declared there is “no military solution” to the conflict, and pledged to guarantee a negotiated political solution.

Russia and Iran have agreed to shelve the Assad issue because Turkey is an essential partner if a ceasefire is to be imposed and terrorist organisations are to be tackled in Idlib province. Unless Ankara exerts serious pressure on Jabhat Fatah al-Sham and its allies, which dominate in Idlib, they will not achieve a ceasefire.

Idlib’s border with Turkey must be sealed, or fighters, funds and arms will continue to flow to these groups. That would make it impossible for Russia and Iran to eliminate them and restore Idlib to Damascus’s rule. Idlib is currently home to several thousand mainly radical fighters and, the UN estimates, 700,000 displaced civilians.

The Assad issue can be postponed until negotiations begin, although disagreements over Assad’s future have forced the suspension of UN-mediated negotiations between the government and the Saudi-backed opposition High Negotiation Committee which has not, so far, been consulted on the ceasefire or invited to take part in the planned Astana talks.

Ankara began turning from the US to Moscow in August due to the failure of Turkey’s efforts to overthrow Assad and deadly bombings carried out by Islamic State operatives against high-profile Turkish targets.

Turkey’s realignment has been accelerated by president Recep Tayyip Erdogan’s anger over Washington’s sponsorship of the Syrian Kurdish-led Democratic Forces to lead the campaign on Raqqa, the de facto capital of Islamic State – a policy Turkey sees as boosting its own dissident Kurds.

Erdogan has also been angered over the exclusion by the US and Iraq of Turkish forces from the ongoing offensive against Islamic State in the Iraqi city of Mosul.