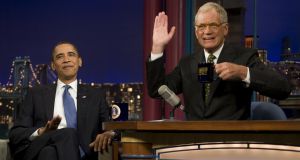 US president Barack Obama was among the high-profile guests David Letterman had on his show throughout the years. Recently, a parade of celebrities including Tom Hanks, Julia Roberts and George Clooney paid their respects to the talk-show host. Photograph: Jim Watson/AFP/Getty Images

“You know what I’m going to devote the rest of my life to?” David Letterman said on his last night as the host of Late Show on CBS. “Social media.”

Letterman ended his 33-year career in late-night Wednesday as he had started it – with the irreverence, self-mockery and mischief that made him such an iconoclastic talk-show host.

His farewell was much better than the usual mawkish television send-off: he mixed favourite segments like his Top 10 list with clips of classic skits and a few restrained fillips of sincerity and humility. His final show was not at all like the Pharaonic and mushy last bow Johnny Carson took when he left The Tonight Show in 1992.

As could be expected, it was a bracing antidote to the weepy extravaganza that ushered his rival Jay Leno into retirement last year.

Letterman’s retirement has gotten an extraordinary amount of focus – a frenzied outpouring of fan devotion, celebrity tributes and nonstop media attention – perhaps because he was so important to the last generation of viewers who grew up watching shows on a television set, and not on a smartphone.

Letterman’s crack about younger performers who use Twitter and Facebook was a shout-out to the talk-show host’s core audience, the late-night viewers who decades ago defined themselves as the insurgents who preferred Letterman to Leno.

All Letterman had to say was the date, June 17th, 1996, and the studio audience began laughing appreciatively. He then showed a clip of one of his more famous pranks when he posed as a server at a drive-through Taco Bell and tormented customers with terrible service.

The clips of his absurdist gags, riffs on conventional television comedy, were fun, but they were also a reminder of how inventive and seditious Letterman was in his heyday, and how much his successors in today’s late-night constellation owe him. One acolyte, Jimmy Kimmel, the host of his own late-night talk show on ABC, is so worshipful he ran a rerun on Wednesday so as to not pull focus from Letterman.

On his show, Letterman demanded a lighter touch. In the Top 10 list, “Things I’ve Always Wanted to Say to Dave,” Julia Louis-Dreyfus, a Seinfeld alumna, said: “Thanks for letting me take part in another hugely disappointing series finale.”

Letterman joined CBS in 1993, a year after HBO introduced The Larry Sanders Show, a mock behind-the-scenes parody of The Tonight Show that starred Garry Shandling as an insecure, self-absorbed talk-show host. But Letterman’s onstage persona at NBC, as host of Late Night, and later at CBS was a one-man sendup of the talk-show genre.

Even after more than 30 years, Letterman never lost his arch, ironical self-awareness; he did not sink into the easy, quid pro quo conventions of late-night talk shows, he kept defying them.

Over the last few weeks, a parade of celebrity guests including Tom Hanks, Julia Roberts and George Clooney paid their respects to Letterman. On Wednesday, he described all the encomia as “over-the-top” and said he found it “flattering, embarrassing and gratifying”.

Mixed feelings make sense in a comedian who was always paradoxical – a winning, witty and supremely confident performer who offstage was practically a hermit and riven by self-doubt. Fans are devoted to Letterman in part because they know his psyche so well: He is an intensely private celebrity who kept processing his personal life in front of the camera.

He helped the nation heal after the September 11th, 2001, attacks by movingly expressing his feelings of sadness and helplessness. He brought his medical team on to his show after his 2000 quintuple bypass, and he even described his affairs with women in his office as “creepy” in an unnerving mea culpa in 2009.

On Wednesday, Letterman said that one of the worst things about retiring is that, as he put it: “When I screw up now, and lord knows I’ll be screwing up, I have to go on somebody else’s show to apologise.”

He mixed jokes about his future with serious references to pivotal moments in his past. He chose as his last musical guests the Foo Fighters because the band cancelled a tour in South America to play on his first show after the heart surgery.

As he has on many a night, Letterman made a humorous reference to his son, Harry, imitating his voice in a squeaky falsetto. He also paid a solemn, quite personal tribute to his son and his wife, Regina, who were seated in the audience. “Thank you for being my family,” he said. “I love you both and really, nothing else matters, does it?”

Mostly, though, he did what he did best, make fun of himself. “It’s beginning to look like I’m not going to get the Tonight Show,” Letterman joked. Letterman defined himself as the loser in his long, bitter battle with Leno. His rival got The Tonight Show gig and higher ratings, but in the end, Letterman won the legacy.