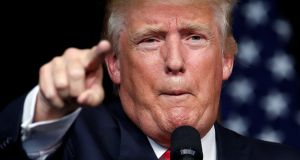 Congressional leaders sounded confident on Tuesday that they will be able to row back from the brink of a government shutdown after Donald Trump signaled a softening on his demand for immediate funding of the wall along the US-Mexico border.

Trump insisted on Tuesday that his controversial plan to build a barrier along the southern border would begin “soon”.

But Republican lawmakers on Capitol Hill were reportedly pressing ahead with a spending measure that does not include funding for the wall in an effort to pass legislation by the Friday deadline.

“The fact that the wall is now off the table – Americans should breathe a huge sigh of relief, the negotiations can resume and move forward,” Senate minority leader Chuck Schumer said during a press conference on Tuesday. Schumer said the bipartisan group of negotiators involved in crafting the spending package are taking the signals from Trump and his team “at face value” and proceeding on the basis that funding for the wall will not be a part of the package.

According to a report in the Washington Post, Republicans on Tuesday proposed a spending bill that included no funding for the wall.

Senate majority leader Mitch McConnell said he was hopeful lawmakers would reach a bipartisan agreement within the next few days.

Asked if Congress would opt instead to pass a stopgap measure to buy more time to negotiate, McConnell said he was optimistic that lawmakers would reach an agreement on legislation that would fund the government through the end of the fiscal year, on September 30th.

Trump indicated that he was backing away from his border wall demand during a meeting with representatives of conservative media outlets on Monday night.

Trump told reporters that he is open to waiting until negotiations for next year’s budget to push for the allocation of funds along the US-Mexico border, according to the accounts of several attendees.

Yet the president was adamant that his concession on the spending bill did not signal that he was any less committed to building the wall, a signature campaign promise. “Don’t let the fake media tell you that I have changed my position on the WALL,” Trump tweeted on Tuesday.

“It will get built and help stop drugs, human trafficking etc.” Kellyanne Conway, the president’s counsellor, said that Trump remains committed to building the wall but suggested that the president was willing to wait for funding in the interest of avoiding a shutdown.

“Building that wall and having it funded remains an important priority to him,” Conway said in an appearance on Fox & Friends on Tuesday morning. “But we also know that that can happen later this year and into next year. And in the interim, you see other smart technology and other resources and tools being used toward border security.”

Trump’s demand had proved a major sticking point: Democrats are adamantly opposed to allocating funds for a wall and Republicans need their support to pass the legislation. A shutdown would be disastrous for Republicans, who control both chambers of Congress and the White House.

It would also come on the president’s 100th day in office, a significant milestone that threatens to be overshadowed if Congress and the White House fail to keep the government open. Despite reservations from liberals and conservatives about the cost and complications of building a barrier on the southern border, Trump on Tuesday doubled down on his commitment to it.

“We’re already preparing,” Trump said. “We’re doing plans, we’re doing specifications, we’re doing a lot of work on the wall, and the wall is going to get built.” Asked at the agricultural event when he expected construction to begin, Trump replied “soon” and specified that it would be completed during his first term as president. “We have plenty of time,” Trump said. “We’ve got a lot of time.”