‘Are you a feminist?’ Ivanka Trump says yes, Merkel fudges 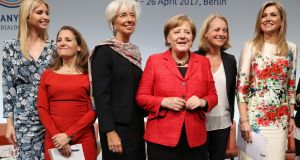 German chancellor Angela Merkel has outed herself as reluctant feminist in a Berlin panel discussion alongside Ivanka Trump, daughter of US president Donald Trump.

The meeting of the two influential women at a G20 event in Berlin, following their first encounter last month in Washington, has been seen as a soft diplomacy coup by the German leader. But after polite contributions on childcare and microcredit, the moderator shook up the discussion by asking the German leader a simple question: “Are you a feminist?”

Flailing about onstage, Merkel – criticised at home for not doing enough for women’s interests – said she preferred backing practical measures to advance women rather than “embellish myself with a feather” of the label earned by long-term feminist campaigners.

“To be honest the history of feminism is one with which I have common ground but also differences,” she said, “and I don’t want to embellish myself with a title I don’t have.”

As Germany’s first female leader dug herself in further and further, it fell to a fellow panellist, Queen Máxima of the Netherlands, to rescue her. “I just want that all women have freedom of choice and opportunities, that they can grab and be happy and proud of themselves,” said the Dutch queen. “If that is a feminist, I am a feminist.”

A grateful Merkel grabbed that lifeline, adding: “Then I am one, too.”

Trump, who described herself as a feminist, suggested many women feared embracing feminism for fear they did not tick every box they felt the term demanded.

“Why it has become so emotive is, I think, because there can be a negativity attached to labelling because it does feel exclusionary of others,” she said.

Canadian foreign minister Chrystia Freeland suggested the discomfort over the term “feminist” was caused by a wider backlash of late towards liberal rights, a reminder that the progress of liberal democracy and values was not linear.

“What we’ve been learning in last years, including in women rights, is that we can’t take them for granted,” she said. “There are a lot of forces in our societies, mine included, that would be more comfortable with the woman staying at home.”

At a two-day event in Berlin under the auspices of Germany’s G20 presidency, also attended by International Monetary Fund chief executive Christine Lagarde, Merkel announced plans for a new public-private fund to empower women in the developing countries

In her first European appearance, US president Donald Trump’s influential daughter said was pushing her father to tackle the barriers to women in the workplace, particularly in regard to how motherhood exacerbated the gender pay gap.

“The reality in the US is [that] the single largest expense is childcare, even exceeding the cost of housing,” she said. “This is an enormous problem and one my father is committed to tackling.”

Where panellists disagreed was whether, given proper advancement opportunities and full childcare, women themselves dared to put themselves forward for advancement.

“We offer endless motivations and are very supportive yet we have to force women to take leadership roles,” said Nicola Leibinger-Kammüller, head of German machine tool maker firm Trumpf, and a fellow panellist.

IMF chief Lagarde disagreed, saying women she met always jumped at an opportunity to lead, if the circumstances were right. For Lagarde, a key to advancing gender equality was to make clear that enabling men’s wives and sisters in the workplace benefitted all.

“Women are not a threat,” said Lagarde, “they are positive contributors to the wellbeing of society.”

1 Coronavirus: Varadkar returns to practising medicine to help during crisis
2 Donald Trump’s clown car administration has put the fear in all of us
3 Irish doctors on getting Covid-19: ‘In 90 minutes, I deteriorated quite rapidly’
4 Robbie Lawlor profile: A feared criminal with a long list of enemies
5 Coronavirus: Plans to move 600 consultants into public system hit obstacle
Real news has value SUBSCRIBE