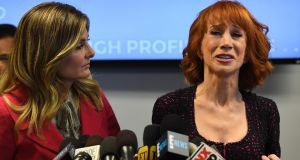 US comedian Kathy Griffin has said she is not afraid of Donald Trump and will keep making fun of him – but repeated she was sorry for a video that depicted her holding a likeness of the US president’s severed, bloody head.

Since the video was posted on Tuesday, she has lost her job co-hosting CNN’s New Year’s Eve special and had all her upcoming comedy shows cancelled.

At a rambling press conference on Friday, Griffin tearfully predicted her career was over and said Mr Trump “broke me”.

“The president, the first lady and the Secret Service have all made very clear their view on those thoughts,” White House press secretary Sean Spicer said.

Griffin (56) repeated her claim that the video was a parody, meant as a pointed comeback to Mr Trump’s remark last summer that former Fox News Channel personality Megyn Kelly had “blood coming out of her eyes, blood coming out of wherever”.

“I’m not laying down for this guy,” she said in one defiant moment. “I’m going to keep making jokes about this guy.”

“Kathy Griffin’s career was over long before she attempted to make a disgusting joke about decapitating the president,” he said.

“What she did was wrong and president Trump and his family have every right to condemn it.”

Griffin appeared surprised at the number of cameras and reporters in a packed conference room at her lawyer’s office in Los Angeles.

She switched between contriteness to combativeness during the press conference, during which she attempted several nervous jokes that drew laughs mostly from her lawyer Lisa Bloom.

Ms Bloom said the comedian had a First Amendment right to make fun of the president.

“Whether or not you get, or like, her artistic expression, in America, Kathy has the right to parody the president,” she said.

“She never imagined it would be misinterpreted as a threat of violence against Trump.”

Backlash against Griffin has continued to grow and the comedian said five of her performances had been cancelled this week.

Even Anderson Cooper, her CNN co-host for the New Year’s Eve show, condemned the images.

1 Covid-19: Taoiseach warns of restrictions in cities as hospital cases pass 100
2 Vatican cardinal resigns in wake of London property investigation
3 How Finland kept Covid-19 in check and protected its economy
4 Aer Lingus staff say they are living in ‘near poverty’ and unable to cover rent
5 People asked not to cross Border as Donegal prepares for Level 3 restrictions
Real news has value SUBSCRIBE