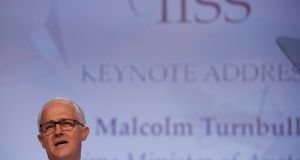 Grappling with the North Korean nuclear crisis and second-guessing Washington’s plans for the Asia-Pacific are liable to dominate the region’s premier security summit this weekend, although China’s territorial ambitions will loom large over proceedings in Singapore’s Shangri-La hotel.

The three-day Asia Security Summit, also known as the Shangri-La Dialogue, hosts defence ministers, military chiefs and other representatives from 27 member states, including China, with a speech by US defence secretary Jim Mattis.

Mattis said on Friday the United States remains committed to its Asia-Pacific allies, as he arrived in Singapore for the forum.

Turnbull said the region wanted to see China take a responsible leadership role or risk becoming isolated. “A coercive China would find its neighbours resenting demands they cede their autonomy and strategic space, and look to counterweight Beijing;s power by bolstering alliances and partnerships, between themselves and especially with the United States,” he said.

Later, answering questions, Turnbull said China could play a key role in reining in North Korea’s nuclear and missile programmes. “China has overwhelmingly the greatest leverage over [North Korea]. With that leverage comes the greatest responsibility,” he said. “The eyes of the world are on Beijing.”

North Korea is not a member of the Shangri-La Dialogue, but the isolated state’s regular missile launches and atomic tests, combined with aggressive rhetoric, have badly jangled nerves in the region.

China is downgrading its presence at the summit, sending a relatively junior military officer, Lieutenant-General He Lei, vice-president of the Academy of Military Sciences, as its chief delegate rather than a four-star general or a defence minister.

China has reclaimed land and built military facilities in many parts of the territory where its claims are disputed by Brunei, Malaysia, the Philippines, Vietnam and Taiwan.

Amid growing fears for freedom of navigation in the South China Sea, China has embarked on a kind of charm offensive to boost its relations with Southeast Asian nations. When charm doesn’t work, it has simply used its economic power to put pressure on countries.

It’s not just economic pressure. When Philippines president Rodrigo Duterte raised the prospect of enforcing an international maritime court’s decision throwing out China’s claims in the South China Sea, his Chinese counterpart Xi Jinping warned that China would go to war over the issue.

The election of Donald Trump sealed the end of his predecessor Barack Obama’s policy of shoring up American influence in the region through “Asia rebalancing” or the “Asia pivot”, and Beijing is keen to fill what it sees as a gap.

Trump has hailed closer ties between himself and Xi but enormous differences and potential areas of conflict remain.

Enter the ancient Greek general Thucydides. Xi has on several occasions of late referred to “Thucydides Trap” when referring to tensions between Washington and Beijing over China’s growing influence in the region.

The Athenian soldier and historian argued 2,400 years ago that the Peloponnesian War was caused by the rise of Athens and the fear this engendered in the established power that was Sparta.

Turnbull said Xi had clearly demonstrated that he was aware of the destructive tensions that can arise between an emerging power and established powers.

“It is vitally important that China respects the rule of law and respects the principle that might is not right,” said Turnbull.

Wang Jiangyu, deputy director of the Centre for Asian Legal Studies at the National University of Singapore, said there was uncertainty because Trump has yet to present any policies toward the Asia-Pacific region.

“Peaceful and co-operative ties between the two countries (China and the United States) will definitely contribute to the stability of the entire region and some regional issues or small conflicts will be controllable since the China-US relationship is the ballast of Asia-Pacific security,” Wang told the Xinhua news agency.

Terrorism is also also going to be a hot topic at the summit. In the past week, terrorists linked to Islamic State have declared a “caliphate” in Marawi in southern Philippines, while three Indonesian police officers were killed by explosives in Jakarta.