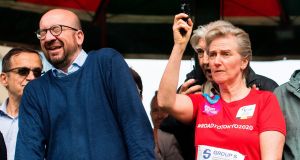 After a tricky few days playing host to Donald Trump, the Belgian prime minister, Charles Michel, may have hoped for a trouble-free few days. It was not to be.

A seemingly innocuous appearance at a 20km run in Brussels has led to Mr Michel seeking medical treatment for damage to his hearing after straying too close to a starting pistol wielded by Princess Astrid, the youngest sister of the Belgian king, Philippe.

Mr Michel was photographed looking startled by the blast at the start of the run through the Belgian capital on Sunday but initially appeared able to laugh off the moment, sparing some royal blushes.

“The prime minister must follow a number of treatments within 48 hours after the incident,” his spokesman, Barend Leyts, told reporters. Further medical treatment is expected through the week, the spokesman added. The Belgian royal family has yet to comment on the incident.

Last week, the Belgian government played host to the US president and his wife, Melania, ahead of a meeting with EU and Nato leaders. Discussions between Mr Trump and Mr Michel were said to have gone reasonably well, although sources noted that the president was not afraid to interrupt and had appeared only vaguely interested in Belgium’s economy.

Instead, Mr Trump was said to have spent time with Mr Michel complaining about the difficulties of setting up golf clubs in EU states, while eating Belgian chocolates. “These are the best,” Mr Trump reportedly told his host.

One source told the Belgian daily newspaper Le Soir: “Every time we talk about a country, he remembered the things he had done. Scotland? He said he had opened a club. Ireland? He said it took him 2½ years to get a licence and that did not give him a very good image of the European Union. ”