Trump and G7 leaders clash over trade and climate

After relatively successful trips to Riyadh, Jerusalem and the Vatican, American president Donald Trump’s trip to Brussels proved to be more difficult. 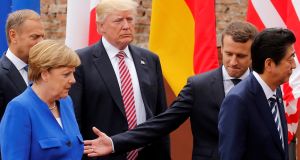 US president Donald Trump clashed with his western allies over trade and climate change on Friday at what one EU leader described as one of the most challenging meetings of the G7 in years.

The gathering on the Italian island of Sicily agreed to step up efforts to fight terrorism in the wake of the suicide bombing in Manchester on Monday in which 22 people died, including pressing the world’s big tech companies such as Google and Facebook to do more to suppress terrorist content.

But remarks by Mr Trump on the eve of the meeting in Taormina attacking Germany’s trade surplus with the US and his refusal to swing behind the 2015 Paris agreement on curbing greenhouse gas emissions soured the atmosphere at what are usually carefully choreographed shows of unity by the leaders of the world’s leading industrialised countries.

German chancellor Angela Merkel took Mr Trump to task for reportedly calling Germany “bad, very bad” for flooding the US market with cars during a meeting with Jean-Claude Juncker, president of the European Commission, and Donald Tusk, president of the EU Council, in Brussels on Thursday.

Speaking to reporters, Ms Merkel said Mr Trump’s criticism of Germany’s trade surplus was “inappropriate” and said she had talked to the president about the issue on the margins of the summit.

Paolo Gentiloni, the Italian prime minister and host of the summit, said Mr Trump held out against the other participants on climate change in what officials said were protracted exchanges. “There is one open question, which is the US position on the Paris climate accords,” he said.

Mr Trump told his G7 counterparts he needed more time to consider whether to follow through on his campaign pledge to pull the US out of the Paris accord. “His views are evolving,” said Mr Cohn. “He came here to learn. He came here to get smarter.”

One White House official said that Mr Trump frequently told his aides that he wanted to see Germany export fewer cars to the US and instead manufacture more at auto plants in America.

The rows highlighted the clashing visions between Mr Trump and his EU counterparts. The lack of clarity over Washington’s position on trade, as well as Russia and the Paris accord led to deadlock in preparatory meetings, with US “Sherpas” unable to detail the president’s position, EU diplomats said.

Mr Trump’s first foreign visit started off with an effusive welcome from Gulf Arab leaders in Saudi Arabia but became more challenging with each stop.

Mr Trump riled European leaders in Brussels on Thursday, berating them for not spending enough on defence and failing to endorse Nato’s commitment to mutual defence at a meeting of the Atlantic alliance.

“This is going to be the most challenging G7 meeting in years,” Mr Tusk told reporters going into the G7 meeting. “It is no secret that some leaders have different positions on climate, on trade . . . Most importantly we have to defend the rule-based international order.”

Mr Tusk, a Polish national, insisted on the need to “reconfirm” G7 leaders’ previous commitment to the full implementation of the Minsk ceasefire accord between Russia and Ukraine that will determine whether to lift economic sanctions on Russia.

“We haven’t seen anything to change our position [on sanctions] ,” Mr Tusk said. Mr Juncker meanwhile said the landmark Paris accord, struck by virtually every country in the world to combat global warming, should be implemented in full.

Mr Cohn disagreed however, suggesting that commitments agreed by the Obama administration were too harmful to the US economy.

“He wants to understand how we can bring back manufacturing, bring back jobs, but still be environmentally friendly, but not have a restriction enforced upon us that makes absolutely no sense, when every other country has a restriction that will not impede their economic growth at all,” Mr Cohn told US reporters.

The leaders did agree to rally behind a call from Theresa May, UK prime minister, for a clampdown on terrorist content on internet platforms and social media. They said tech companies should “substantially increase their effort to address” the issue terrorist content.

“We encourage the industry to act urgently in developing and sharing new technology and tools to improve the automatic detection of content promoting incitement to violence,” they said.