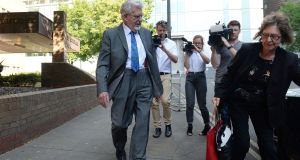 The 87-year-old had been accused of indecently assaulting three teenage girls, the youngest of whom was 13, at public events between 1971 and 1983.

After five hours of deliberation at Southwark Crown Court in London on Tuesday, the jury said they were unable to reach verdicts on any of the four charges and were discharged by Judge Deborah Taylor.

It was a retrial for Harris on three of the four counts, after a jury in a previous trial at the same court in January and February failed to reach verdicts.

After deliberating since Friday afternoon, the jury foreman told the judge on Tuesday that its members were unable to reach unanimous or majority 10-2 decisions on any of the charges.

The prosecution was given until this afternoon to decide whether to seek a second retrial on the charges.

The retrial heard from three women who claimed Harris molested them when they were young.

They included a woman who alleged he groped her at a music event in London when she was 14 in 1971, and a 16-year-old who told jurors he touched her inappropriately during filming of ITV show Star Games in 1978.

The 13-year-old alleged he molested her after the broadcast of an episode of BBC children’s programme Saturday Superstore in 1983.

Harris did not give evidence, with his lawyers saying he did not remember any of the events in question.

But his lawyers claimed that the women were motivated by greed, coming forward after he was convicted in June 2014 of 12 counts of indecent assault.

Harris left HMP Stafford on licence part-way through his retrial after serving less than three years of a sentence of five years and nine months handed down in June 2014 for 12 unconnected indecent assaults, including against an eight-year-old autograph hunter.