US presidential nominee Hillary Clinton asks supporters to 'not get distracted, from the real choice in this election,' saying Donald Trump 'has proven himself to be temperamentally unfit and totally unqualified to be President.' Video: Reuters 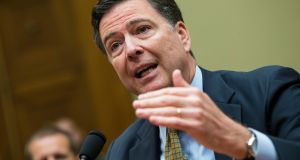 The Clinton campaign blasted FBI director James Comey for “jaw-dropping” double standards on Monday after claims that he had sought to withhold evidence of Russian support for Donald Trump for fear of influencing next week’s US election.

In a sharp escalation of their unprecedented war of words with federal law enforcement authorities, Ms Clinton’s key aides contrasted this apparent caution with Mr Comey’s controversial decision to release new details of its investigation into Ms Clinton’s private email server to lawmakers on Friday.

“It is impossible to view this as anything less than a blatant double standard,” her campaign manager Robby Mook told reporters, claiming the decision “defied all logic”, especially as other intelligence agencies had favoured disclosure of suspected Russian involvement.

“Through these two decisions he shows he favours acting alone and without consulting … these are not the hallmarks of a responsible investigation,” added Mr Mook.

Both CNBC and the Huffington Post have reported that Mr Comey privately urged against naming Russia for allegedly meddling in the election and hacking Democratic email accounts.

Though this advice has not been confirmed officially, it tallies with the fact the FBI’s name did not appear on a list of US intelligence agencies supporting the allegations.

“A foreign power was trying to undermine the election. He believed it to be true but was against putting it out before the election,” one former official told CNBC. Mr Comey’s position, this official reportedly said, was: “If it is said, it shouldn’t come from the FBI, which as you’ll recall it did not.”

The Clinton campaign called on Mr Comey to “immediately explain this incongruence”.

“He has set the standard for narrating a play-by-play,” added spokesman Brian Fallon. “If that is his way of handling things, he needs to take the same approach to the Trump campaign.”

On Monday night, NBC News reported that the FBI was conducting a preliminary inquiry into former Trump campaign manager Paul Manafort’s business ties to Russia, though it was not yet a criminal investigation. Mr Manafort called the report “an outrageous smear being driven by Harry Reid and the Clinton campaign”.

Earlier the White House highlighted concerns over the FBI director’s decision to announce that the bureau was examining whether newly discovered emails may be relevant to its investigation of Ms Clinton’s use of a private email server.

Press secretary Josh Earnest was careful to say FBI director James Comey is regarded by Barack Obama as a man of integrity and principle. But he also noted the importance of “longstanding tradition and practice and norms” and warned of the “risk” of communicating with Congress.

Mr Comey has faced a fierce backlash for going public with the new FBI investigation just 11 days before a presidential election, reportedly against the advice and guidelines of attorney general Loretta Lynch and other senior figures at the department of justice.

On Sunday the FBI obtained a search warrant to begin reviewing the emails, reportedly numbering 650,000 and found on the laptop of Anthony Weiner, estranged husband of top Clinton aide Huma Abedin.

On Monday, a spokesman for the Office of Special Counsel indicated that the independent federal agency may be investigating Mr Comey over an alleged violation of the Hatch Act, which guards against federal officials seeking to influence an election.

An emboldened Mr Trump has described the revelation as “bigger than Watergate”, but there is little initial evidence the news has upended the presidential race. A Morning Consult/Politico poll carried out after the announcement put Clinton three points ahead, while a CBS/YouGov survey of likely voters in 13 battleground states showed that only 1 per cent of Clinton supporters were less likely to vote for her as a consequence.

Mr Trump claimed on Monday the FBI had stumbled across a digital “mother lode” and predicted they would discover missing work-related emails that had been deleted from Ms Clinton’s computers.