US President Donald Trump has announced that he would be suspending all travel from Europe to the United States, for 30 days starting on Friday. Ireland and the UK are excluded from the ban. Video: Reuters

US president Donald Trump gives an address to the nation from the Oval Office of the White House in Washington. Photograph: Doug Mills/Pool via Reuters

US president Donald Trump announced a 30-day ban on all non-US travellers entering America from Europe, with some exceptions, in a dramatic escalation of the US response to the coronavirus.

In an address to the nation on Wednesday night, Mr Trump announced the ban, specifying that it did not apply to Britain. But guidance issued by the US department of homeland security suggested that the ban only applies to countries in the Schengen zone – the European borderless free travel area.

This means that Ireland – as well as Romania, Bulgaria and Britain – are not included in the ban as they are not members of Schengen. Other non-EU countries that are in Schengen, including Switzerland and Iceland, are covered by the 30-day ban.

The development comes as Taoiseach Leo Varadkar prepares to meet Mr Trump on Thursday morning in the oval office – the first EU leader to meet the president since the announcement. The shamrock presentation ceremony later in the afternoon in the White House has been cancelled, however.

The Taoiseach, who addressed the Ireland Funds dinner on Wednesday night in Washington, was briefed by officials amid no definitive information about the precise scope of the ban, though it is understood that Ireland will be exempt.

The decision to announce Britain’s exemption — which is understood to have taken British officials by surprise — was widely seen as a reflection of the Trump administration’s alliance with the government of Boris Johnson and the president’s scepticism of the European Union.

US citizens and lawful permanent residents are not included in the ban which comes into effect at midnight on Friday.

“I am confident that by counting and continuing to take these tough measures, we will significantly reduce the threat to our citizens and we will ultimately and expeditiously defeat this virus,” Mr Trump said in his televised address. 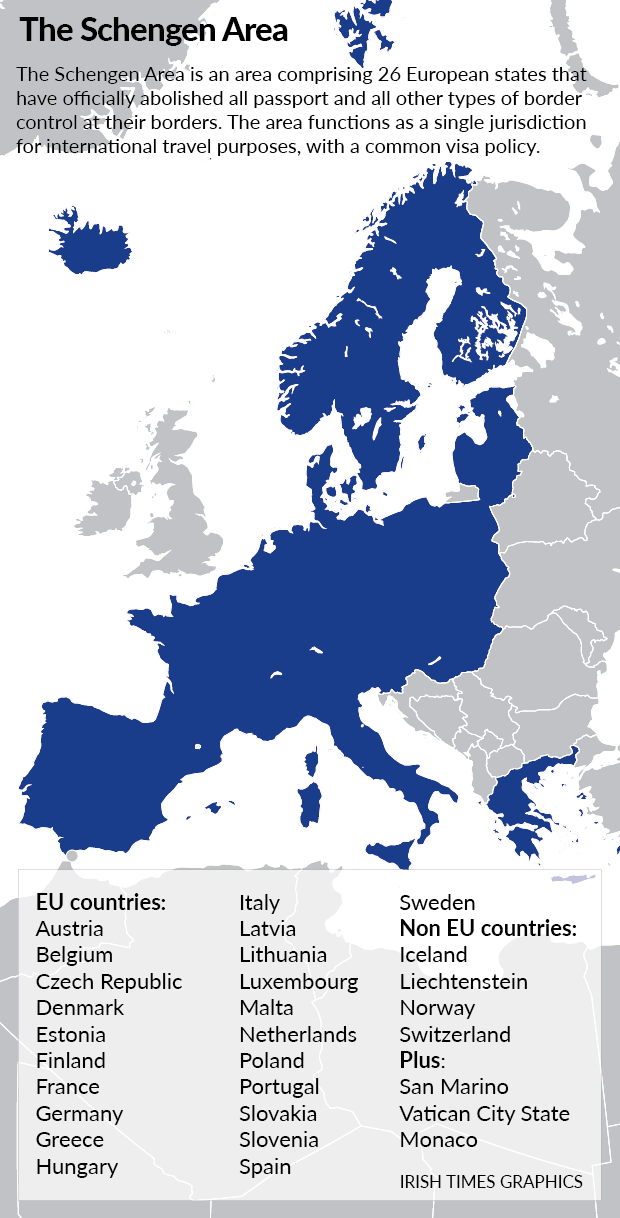 The action @POTUS is taking to deny entry to foreign nationals who have been in coronavirus-affected areas will keep Americans safe & save lives. These are not easy decisions but they are required. I will issue guidance within 48 hours outlining details.https://t.co/KYXE7JKswC pic.twitter.com/zgi6r5FoZq

Here is #DHS notice on #travelban. Appears to refer to #Schengen countries - #Ireland not included https://t.co/2kwUeRuJwW

News of the development emerged shortly after US House Speaker Nancy Pelosi addressed the Ireland Funds dinner where she was awarded with the Distinguished Leadership Award. Ms Pelosi stepped out of the room shortly beforehand to speak to vice-president Mike Pence by phone ahead of the president’s announcement.

Speaking at Wednesday night’s dinner, Mr Varadkar paid tribute to the parties in Northern Ireland for restoring the Executive. The resumption of the devolved government “will give the public as well as the political parties confidence in politics and in the sustainability of the institutions,” he said. “It will also make possible meaningful reform of the petition of concern.”

He also thanked Ms Pelosi last year for her support for Ireland and the Belfast Agreement during her visit there in 2019.

Ms Pelosi also reiterated her support for the Belfast Agreement, and her warning to Britain that a trade deal between the US and UK was contingent on the agreement being upheld. She noted that she had made it clear “to our dear good friends in the UK . . . that in any Brexit deal the Good Friday accords must be honoured or there could not be a US-UK trade agreement.”

Thursday’s St Patrick’s Day events have been further curtailed following the change in strategy by the White House, which has been strenuously arguing that the reaction to the coronavirus has been over stated.

While Mr Varadkar will meet Mr Trump on Thursday, the shamrock presentation reception in the afternoon has been cancelled.

During the bilateral meeting, Mr Trump is expected to vigorously lobby Mr Varadkar to restrict Huawei’s operations in Ireland, The Irish Times understands.

Sources in Washington have said the issue will be front and centre in Thursday’s discussion from the American perspective, particularly given the high number of US multinationals based in the country.

The fact that the Chinese telecoms operator is not as embedded in Ireland’s telecoms infrastructure as in other countries, is seen by senior figures in the White House as a reason why the government may be conducive to the US stance.

A spokesman for the Chinese company said: “Huawei opposes the politicisation of 5G technology. We believe that decisions on 5G infrastructure should be based on facts and standardisation, not on speculation and prejudice.

The ongoing tariff war between Airbus and Boeing is also expected to be raised by the Taoiseach during Thursday’s meeting, which will also be attended by US trade representative Robert Lighthizer and treasury secretary Steve Mnuchin.

Irish exports like Kerrygold have been hit by tariffs introduced, even though Ireland has no involvement with Airbus, and the Government has argued that Ireland is being unfairly impacted.

Mother tried to poison three children on day before she killed them, court told

Netanyahu’s master plan for Israel and Palestine has failed

1 Mother tried to poison three children on day before she killed them, court told

5 Cyberattack: No verification that ‘real data’ has been released, says Donnelly