Charges decision in shooting of US teenager may take months, prosecutor warns 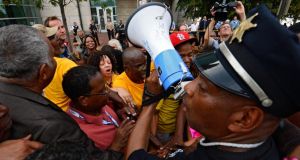 Anthony Shahid of the Tauheed youth group (right) prays with demonstrators and along with members of the Justice for Michael Brown Leadership Coalition march today near the Buzz Westfall Justice Centre where a grand jury will hear the case on the August 9th shooting of Michael Brown, after a further night of demonstrations and protests, in Clayton, Missouri. Photograph: EPA/Larry W Smith 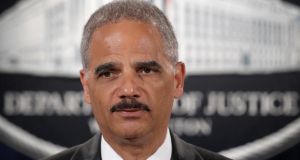 US attorney general Eric Holder assured Ferguson residents that justice would prevail in relation to the shooting of Michael Brown, and stressed the Obama administration’s commitment to civil rights in this and other cases. Photograph: Alex Wong/Getty Images

A prosecutor has warned it will probably be two months before a decision is taken on whether to charge the police officer involved in the shooting of an unarmed teenager in Ferguson, Missouri.

The circumstances of the death of 18-year-old Michael Brown on August 9th triggered riots and continuing nightly protests in the St Louis suburb.

A grand jury convened for the first time to hear preliminary evidence about the encounter between Mr Brown, and Ferguson police officer Darren Wilson, who fired six bullets under disputed circumstances.

US attorney general Eric Holder, who visited Ferguson yesterday and Mr Brown’s family, assured residents that justice would prevail in the matter and stressed the Obama administration’s commitment to civil rights in this and other cases.

However, Robert McCulloch, the county prosecutor, warned of a substantial wait before the jury would decide whether or not there was probable cause that a crime had been committed.

“Our target date is the middle of October,” Mr McCulloch told ABC News, referring to when his office would finish presenting evidence and ask the jury to make a decision. “They will have absolutely everything there is, every piece of paper, every photograph, every bit of physical evidence, all of the forensic information.”

The wait will test the patience of protesters who have marched each day and night in Ferguson since the shooting. The demonstrations have frequently escalated to looting and violent confrontations with police. Police and national guard units, which arrived on Tuesday, braced for more clashes after sunset yesterday.

Protesters have questioned the impartiality of Mr McCulloch, who has deep family ties to local police, including his father, an officer who died during an encounter with a black man. Dozens of people demonstrated in front of Mr McCulloch’s office. “People do not trust McCulloch in this particular case,” said Antonio French, a local alderman.

However the governor has stopped short of ordering a recusal, and in a radio interview McCulloch, who has defended his impartiality, challenged Nixon to take a stand one way or the other. “Step up and say I’m on the case or off the case.”

Last night rain, a diminishing crowd of protesters and a decision by the police to keep a relatively low profile led to a largely uneventful evening at the scene of nearly two weeks of demonstrations.

There was a brief confrontation after two white people, a man and a woman, arrived with signs in support of Darren Wilson, the police officer who shot Michael Brown. They started marching along the street near demonstrators who were demanding that Wilson be put on trial.

Some of the demonstrators grew hostile and pursued the pair, shouting “white bitch” and “f**k them up”.

The man, who identified himself only as Chuck, was carrying a sign that said: “Justice for police officer Darren Wilson”. He told the Guardian he was not being deliberately provocative and that he was marching because “people shouldn’t be afraid to stand up for what they believe in”.

Two minutes later the police bundled both of them into a van as an increasingly agitated crowd surrounded them. – (Guardian service)