Donald Trump inched closer to the U.S. Republican presidential nomination after easily winning against his rivals in the Nevada caucuses on Tuesday (February 24), giving him his third win in four early nominating contests. 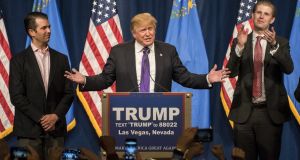 When billionaire Donald Trump, fast becoming the US answer to Silvio Berlusconi, took to a Vegas stage for his third primary victory party in a row on Tuesday night, he bragged.

Nothing unusual there – The Donald likes bragging. But this brag might in fact be accurate.

Much to the frustration of establishment Republicans and the fears of everyone else to the left of them, Trump’s march to the party’s presidential nomination in his bizarre election could soon be unstoppable.

“We’re going to do it and it’s going to happen fast,” Trump told his supporters at the Treasure Island casino and resort.

His jackpot win in the Nevada caucuses on Tuesday – 46 per cent to 24 per cent of his closest rival, Florida senator Marco Rubio – was Trump’s third consecutive victory, putting him on course to be the Republican candidate in November’s presidential election in a likely face-off with Democrat Hillary Clinton.

Riding high off wins in New Hampshire and South Carolina, Trump is the undisputed frontrunner after victories in three of the first four nominating states. He is now looking to use the momentum from Nevada to propel him into 11 state contests on “Super Tuesday” next week and later primaries in March and April.

“It’s going to be an amazing two months,” he told his supporters. “We might not even need the two months.”

He could be right. Trump needs 1,237 delegates to claim the party’s nomination by the end of the nominating process on June 7th, ahead of the Republican convention, where the nominee will be formally chosen in Cleveland in July.

Rubio has failed to move the needle, despite a slew of endorsements from the Republican establishment, including the party’s former nominee Bob Dole, on Monday.

The Florida senator lost by a wider margin to Trump in Nevada (where the Cuban-American lived for a time) than in South Carolina.

It’s not clear where Rubio might win a state on March 1st. Trump is leading the polls in almost all of the Super Tuesday states, with the exception of Cruz’s home state of Texas and next door in Arkansas.

In addition to Rubio in Florida, Trump is outperforming Ohio governor John Kasich in his own state.

“It’s always nice to be beating the governor,” said the businessman.

Assuming Trump, as the polls are showing, continues to hold at least 30 per cent in upcoming states, he would win more than 400 delegates in states where they are proportionately distributed.

He is also eyeing up the big winner-take-all states, including Florida (99 delegates) and Ohio (66 delegates), on March 15th. These could boost his delegate totals by mid-March, giving him an unassailable lead.

This suggests that the Rubio-Cruz strategy of winning enough of the anti-Trump faction to be the single, clear alternative may be built on sand. Trump has shown that he can attract supporters of candidates departing the race.

Trump even won over most of a small number of Republican Latinos in Nevada, despite facing two Hispanic Americans and threatening to build a “great wall” with Mexico to keep out immigrants.

A win in Texas will keep Cruz in the race, but Rubio and Kasich are going nowhere, at least until Florida and Ohio votes.