US Letter: Lawyer Douglas Emhoff has put aside his career to prioritise that of his wife 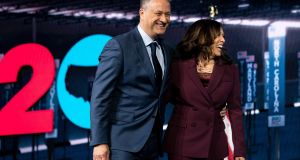 Kamala Harris and her husband, Douglas Emhoff, after she accepted the Democratic nomination for vice-president in August. Photograph: Erin Schaff/The New York Times

While it is unclear if next year’s St Patrick’s Day celebrations will go ahead as planned given the coronavirus pandemic, Taoiseach Micheál Martin may share an early-morning repast in March with America’s woman of the moment.

In keeping with tradition, Kamala Harris is expected to host the annual St Patrick’s Day breakfast at the vice-president’s residence at the Naval Observatory.

The breakfast is a highlight of the St Patrick’s Day celebrations in Washington, where shivering journalists gather outside the residence until they are brought in from the cold to peer into the drawing room where the vice-president, taoiseach and officials indulge in platters of fresh fruit and steaming eggs. Clinking coffee cups and gracious speeches typically ensue as both political figures celebrate the links between Ireland and the United States.

No doubt efforts are being made in Iveagh House to find any Irish links to the vice-president-elect.

There have been reports that Harris descended from Hamilton Brown, a slave owner who emigrated from Co Antrim to Jamaica. She can rest assured that if a link is to be found, Ireland will find it.

But while Harris’s own lineage has been a source of interest – her mother emigrated to the US from India, her father from Jamaica – she is making her own history.

While Joe Biden in many ways represents a return to the past – his political career as a senator and vice-president spanned more than four decades – Harris symbolises a new America. Though Barack Obama broke the racial barrier by becoming the first black president, Harris will be the first person of colour to occupy the role of vice-president. Four years after Hillary Clinton failed to break the glass ceiling, Harris will also be the nation’s first female vice-president.

A picture circulating this week of Harris beside her predecessors – all white, male and mostly grey-haired – was a visual reminder of just how significant this moment is.

Her victory speech last week underscored the symbolism of the moment, her awareness that this was not just a personal achievement but an election that represented a more diverse US. “While I may be the first woman in this office, I won’t be the last,” she said to cheers. “Because every little girl watching tonight sees that this is a country of possibilities.”

But while Harris may be breaking boundaries, so too is her husband, Doug Emhoff, who will become the first “second gentleman”.

Emhoff, a New York-born lawyer, and Harris met on a blind date in San Francisco in 2013 when Harris was attorney general of California. A year later they were engaged. Harris is close to Emhoff’s two children from his first marriage – who call her “Momala” – and thanked them during her victory speech. A funny video of Harris describing her first meeting with her Jewish mother-in-law was widely shared this week.

Emhoff, who is a partner at the DLA Piper law firm, has announced he is leaving his job, having taken a leave of absence when Harris was named as Biden’s running mate because of possible ethical conflicts.

Never has a house-husband seemed so happy. Emhoff has been a beaming presence at his wife’s side throughout the campaign. In the final weeks before election day he criss-crossed the country, sometimes campaigning alongside Biden’s wife, Jill. His video of Harris discussing their just-confirmed victory during a phone call with Biden last Saturday as the couple were on a weekend walk went viral, as did the picture of him hugging Harris in her jogging gear.

In an interview with Marie Claire magazine last month headlined “The Good Husband”, Emhoff described how he saw his role. “I’m not her political adviser. I’m her husband.” He said his role during her political ascent from attorney general to senator in Washington DC was “to be there for her, to love her, to have her back, to talk it through, to help her”.

As he prepares for the next stage in Harris’s career, Emhoff will need to get used to increased public scrutiny. This week the couple were almost mobbed as they dropped into a bakery in Georgetown, not far from their apartment in northwest DC, surrounded by members of the secret service.

But as the US’s first male presidential or vice-presidential political spouse, he too can act as an important role model – a successful male professional who puts aside his own career to prioritise that of his wife. With a growing proportion of women now being the chief breadwinner in many American families, Doug Emhoff will be another visual reminder of the changing social and familial dynamics of modern life.