Donald Trump is no longer an insurgent in the party, he has effective control of it 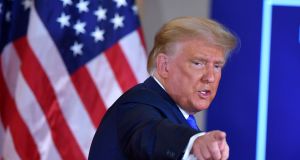 Trump is reported to have asked senior advisers in the Oval Office last Thursday whether he could launch an attack on Iran’s nuclear facility. Photograph: Getty

‘If Donald Trump carries the banner of my party, I think it taints conservativism for generations to come. I think his campaign is opportunistic, race baiting, religious bigotry, xenophobia. Other than that he’d be a good nominee.”

Those are the words of senator Lindsey Graham, of South Carolina, spoken in 2016. He commented that choosing between Senator Ted Cruz and Trump as the 2016 Republican candidate was “like being shot or poisoned”.

What happened between 2016 and this November when Graham has turned out to be one of Trump’s chief congressional facilitators and cheerleaders?

Georgia neighbours South Carolina and is controlled by the Republican Party. Its secretary of state, Brad Raffensperger, has revealed that Graham had asked him whether it would be possible to invalidate legally cast ballots after Trump was narrowly defeated in Georgia.

Raffensperger told the Washington Post that Graham, chairman of the Senate judiciary committee, who recently rushed through the appointment of supreme court justice Amy Coney Barrett, had asked him whether it was possible to make a case that political bias might have played a role where poll workers accepted higher rates of mismatched signatures on mail-in ballots and whether he could justify tossing out all mail-in ballots in those counties. Raffensperger was stated to be “stunned” by this inquiry.

Graham, for his part, denied that his inquiry was in any way designed to invalidate legally cast absentee ballots.

Quite why Raffensperger would falsely accuse his fellow Republican is hard to understand or credit. But it is noteworthy that two Georgia Republican senators now facing challenging run-off elections in January also called for Raffensperger to resign for defending the Georgia result.

Rudi Giuliani and the Trump clique are campaigning to invalidate the result of the presidential election on the basis that many voting machines supplied by a Toronto-based contractor called Dominion may have been pre-programmed to steal Trump votes.

Lacking any evidence to support this particular conspiracy theory, they suggest that Dominion did business in Venezuela and added that the Venezuela link probably evidenced Chinese involvement in the electoral fraud.

Graham is an appalling example of the self-serving Republican chameleon. Realising that his earlier rejection of Trump was damaging to his own chances of re-election to the US Senate, he cravenly ate all his words as outlined above and quietly fell into the Trump slipstream.

What has changed in the meantime is that Trump is no longer an insurgent in the Republican Party; he has effective control of it. The “stolen election” narrative is designed to create a wholly dishonest sense of victimhood among the Republican base which will sustain it in opposition to president-elect Joe Biden during his term, which starts in January.

The stolen election narrative is aimed at creating a pretext for deep-seated prejudice as was the racist “birther” slur invented by Republicans, including Trump, to undermine the legitimacy of Barack Obama’s presidency.

I recently finished Robert Caro’s Master of the Senate volume of Lyndon Johnson’s biography. The postwar Senate portrayed by Caro contained a bastion of southern white supremacism which used every means in Washington to prevent federally guaranteed voting rights for blacks in the southern states and every attempt to defend the civil rights of those black citizens. Even the introduction of effective anti-lynching laws was opposed.

Segregated southern blacks were prevented from voting by a variety of means, including intimidation, if they registered. They included biased general knowledge tests conducted orally by “good ole boy” administrators and poll taxes designed to exclude the poor.

Southern senators, then mainly Democrats, resisted federal reforms on the ground that they interfered with state rights guaranteed under the US constitution. The good ole boys haven’t changed their agenda – just their tactics.

Trump is reported to have asked senior advisers in the Oval Office last Thursday whether he could launch an attack on Iran’s nuclear facility.

Apparently he was only dissuaded by Mike Pence, Mike Pompeo, the acting defense secretary and the chairman of the chiefs of staff.

Trump would do anything to create a crisis that would justify retention of office. He will try to use political scorched-earth tactics between now and inauguration day on January 20th.

World peace and American democracy remain in serious peril. The likes of Graham and all Trump’s sneaking regarders, are complicit by their silence in this great evil.