Biden meets family of George Floyd ahead of funeral in Houston 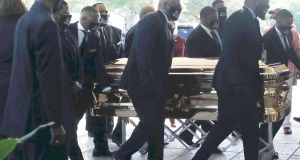 Pallbearers bring the casket bearing the remains of George Floyd into the Fountain of Praise church in Houston, Texas. Photograph: Mario Tama/Getty Images

The funeral of George Floyd, the 46 year-old man who died in police custody two weeks ago, will take place in Houston, Texas on Tuesday.

Mourners gathered on Monday to pay their respects to the man who has become a symbol of racial injustice in America.

For more than six hours, they filed past Mr Floyd’s casket ahead of Tuesday’s private burial and funeral. Mr Floyd was born in North Carolina and moved to Minnesota in 2014, but spent most of his life in Houston where the burial will take place.

Former vice-president Joe Biden travelled to Houston on Monday to meet privately with the Floyd family. He is expected to deliver a pre-recorded video address at the funeral.

On Monday, the police officer who knelt on Mr Floyd’s neck for almost nine minutes after his arrest in Minneapolis on May 25th, appeared in court via videolink. Derek Chauvin, who faces a charge of second-degree murder and manslaughter, was formally charged with Mr Floyd’s murder at the hearing. Bail was set at $1.25 million, or $1 million with certain conditions including an obligation for the former police officer to surrender any weapons, and not to contact members of the Floyd family. He will appear in court again on June 29th.

Three other officers who were present while Mr Floyd lost his life were charged last week with aiding and abetting second-degree murder.

Thousands of people queued to pay their respects to Mr Floyd on Monday at the Fountain of Praise church in Houston. Social distancing rules due to the continuing threat posed by covid-19 limited the number of people in the church at any one time.

Local police said that dozens of people received medical treatment for heat-related illnesses, and Houston Fire Department personnel had set up cooling stations near the church due to the intense heat.

Several of the mourners - many of whom did not know Mr Floyd when he was alive - had travelled to Houston from other states to honour his memory. His death on May 25th has sparked some of the largest anti-racism protests in the United States in recent years.

Protests have been taking place across the country since Mr Floyd’s death, with more expected on Monday night Some of the largest demonstrations of recent days took place in cities like Washington, New York and Philadelphia. Senator Mitt Romney became the first Republican senator known to have taken part in the demonstrations when he joined a group of Christians marching to the White House on Sunday. Asked why he was marching, Mr Romney replied: “to make sure people understand that black lives matter.”

In New York, which lifted social distancing restrictions for the first time on Monday exactly 100 days after the city announced its first case of coronavirus, further protests were expected on Monday night. On Sunday there were few signs of the clashes that had marred some demonstrations last week.

Meanwhile in Washington a fence erected last week around the perimeter of Lafayette Square in front of the White House was decorated with signs left by protesters, some with the slogans “Black Lives Matter” and “I can’t breathe,” the words Mr Floyd said repeatedly before he died.

On Monday, House Speaker Nancy Pelosi and Senate minority leader Chuck Schumer wrote to Mr Trump demanding that he reopen Lafayette Square, a week after law enforcement officers forcibly removed protesters from the area and Mr Trump crossed the square to pose outside St John’s Church with a bible.

“Your conversion of this unique public park in the heart of our Nation’s capital to what looks like a militarized zone denies citizens access to the park and sends the worst possible message to the American public and people around the world,” they wrote.