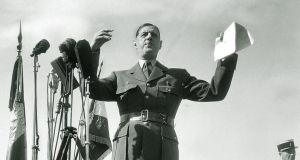 The first biopic of the last great Frenchman, titled simply De Gaulle, opened in French cinemas on March 4th. It focuses on events leading up to Charles de Gaulle’s famous Appel du 18 Juin, which was the founding act of the French Resistance and the beginning of de Gaulle’s political career.

The film reads like an advertisement for quadruple de Gaulle commemorations between now and November.

On May 17th, President Emmanuel Macron will travel to Montcornet, where Colonel de Gaulle stopped a German advance 80 years ago, in one of the rare French counter-attacks of the May 10th-June 22nd, 1940 Battle of France.

De Gaulle performed so brilliantly at Montcornet that prime minister Paul Reynaud promoted him to general and made him a junior cabinet minister.

The French military was long suspicious of de Gaulle, because he became a politician, and because he gave up Algeria. So de Gaulle’s military prowess was not previously celebrated. “This is also a way of showing that France didn’t just give up,” says a close adviser to Macron.

On June 18th, Macron will travel to London to commemorate the appeal which Churchill allowed de Gaulle to broadcast from the BBC. The French president will award the Legion of Honour to the City of London, represented by mayor Sadiq Khan, and will probably call on Queen Elizabeth.

“It’s our way of saying thank you to the English for putting up with de Gaulle for four years,” jokes the presidential adviser. “Winston Churchill said the heaviest cross he had to bear during the war was the Cross of Lorraine.”

The Cross of Lorraine was de Gaulle’s wartime symbol. Macron has integrated it into the logo of the Élysée. De Gaulle’s Mémoires de Guerre sit on the desk behind Macron in his official photograph.

Macron’s adviser sees similarities between the first president of the Fifth Republic and Macron, its eighth. “De Gaulle also thought politics had to rise above the left-right divide. He dismissed the Fourth Republic as the republic of parties, and saw himself as a force for the higher, general interest.”

Macron’s preoccupation with French influence and the preservation of France’s interests abroad is another similarity, the adviser says. “Emmanuel Macron thinks France’s singular voice must be preserved on the world stage. He wants to keep France non-aligned, as shown by the recent Franco-Russian rapprochement.”

During the second World War, a Socialist group in London tried to smear de Gaulle as an apprentice dictator. In a 1964 essay, the future Socialist president François Mitterrand accused de Gaulle of maintaining a permanent coup d’état.

“We wish today’s Socialist party would join us in reforming the country,” says Macron’s adviser. “Instead, they demonstrate with the far left against pension reform and call us dictators.”

But the inspirational lesson of de Gaulle’s life, conveyed in the film about him, is: Never give up. Not even in the darkest hour.

De Gaulle was determined to keep fighting after Marshal Philippe Pétain, the hero of Verdun and his commanding officer in the first World War, gave up.

Anglo-French unity was tossed into the wastebin of history

Gen de Gaulle flew to London to seek Winston Churchill’s help. He attempted to persuade prime minister Reynaud to accept a plan concocted by Churchill and Jean Monnet, a future father of Europe, to merge France and Britain.

The British parliament voted for Anglo-French unity on June, 16th 1940. They agreed to a single Franco-British government, with one parliament, one army and the sharing of all resources. British citizens were to enjoy French nationality, and vice versa.

But Reynaud was forced to resign and was replaced by the collaborationist Pétain. In a speech broadcast on June 17th, Pétain said “I offer to France the gift of my person to lighten its misfortune”. Anglo-French unity was tossed into the wastebin of history.

De Gaulle spent that night chain-smoking and writing the appeal of June 18th. Churchill’s nervous cabinet ministers demanded that he tone down the opening lines about Pétain’s treachery.

“France is not alone!” de Gaulle repeated three times. The US and Soviet Union had not yet entered the war. But de Gaulle spoke with prescience of a world war. “The flame of the French resistance must not and will not go out,” the general promised.