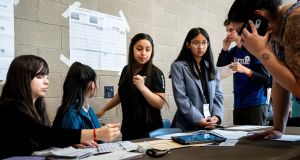 The basketball gym in Mary Welsh elementary school, Williamsburg, Iowa, was unusually busy for a Monday evening. Or rather, it was busy in an unusual way. On any other night, parents would watch their children from the bleachers. On February 3rd, however, children looked on at their parents shuffling around the gym. It was the night of the Iowa caucuses, and while there was disparity in the political preferences of the caucus-goers, there was absolute uniformity in another respect: age. Almost all of the Williamsburg residents who turned out to caucus were over the age of 40.

This scene was replicated throughout Iowa, and nearly three weeks later, on February 22nd, it was replicated throughout Nevada. In Jim Bridger Middle School, North Las Vegas, the differences were superficial; those in attendance wore T-shirts and shades rather than fleeces and hats, and were more ethnically diverse than their Iowan counterparts. The age profile was the same though, and not just among the voters. In both Iowa and Nevada, the ground staff of almost every campaign consisted of people in their 20s. They had taken semesters off from prestigious universities, foregone job offers, and left their homes in Los Angeles or El Paso to engage in the political process. When the calls came from HQ asking them to drive to Alabama or Arkansas for Super Tuesday, they didn’t hesitate.

In between the two caucuses, a general election changed the Irish political landscape. A national constituency in which young people had a strong voice voted for change, and they got it. The impact of the youth vote on the election is clear, but just how politically engaged are young people in Ireland? How do we compare to our American counterparts?

After the Irish general election results, there was no shortage of jubilant Facebook posts. But if the change-seeking youth felt a sense of ownership over the outcome, they shouldn’t have. For the most part, the youth vote was just that: a vote. In the weeks leading up to the election, social media feeds were dominated by arguments for a left-wing coalition, and tactical voting guides for how best to achieve it. But voting, while undoubtedly a good thing to do, is undeserving of congratulations. In terms of political engagement, it’s the bare minimum.

Seeing campaign staff embrace one another after the results of Super Tuesday, it was hard to find equivalencies. These were 20-somethings who had put their lives on hold to live in Sioux City, Iowa, for months before relocating on short notice to Dallas, Texas. If you really think that the Irish youth are politically engaged then ask yourself: can you imagine a Trinity graduate going out to knock on doors in Roscommon for six months, for no reason other than their belief in a candidate?

This might sound facetious, but it is the reality of the standard set by our American counterparts. The Irish youth are not as politically engaged as they would like you to think. The average young person in Ireland cares about housing, licensing laws, transport infrastructure, and the environment. But retweeting an article about rent control is not political engagement. Letting everybody know that you bought a keepcup is one thing, but going out and organising for your local Green candidate is another.

The fact that young people turned to Sinn Féin illustrates the extent of their political ambivalence. There is no reason why Sinn Féin should represent a “change” party in the minds of young people. The party has, after all, been at the front of the national political conversation since the foundation of the State, and carries exactly the sort of baggage that should turn young people off. The youth could have mobilised around the Green Party or the Social Democrats – newer parties which represent more credibly the issues that young people care about – but this election, as with every election in recent memory, young people ruled out taking responsibility for their political realities. Was there a sense of young people actively mobilising around a candidate, or engaging in grassroots organising? I don’t think so. The relatively small number of young people who did campaign were the sort who spent their college days in the youth wing of a party. Young people in Ireland were content to be a constituency; they looked at the electoral map and chose the easiest possible way of electing a government that was not Fianna Fáil or Fine Gael. There are many reasons why the Bernie Sanders phenomenon could not happen in Ireland, but chief among them is the apathy of our youth when it comes to political engagement.

We are more cynical about politicians and politics than our American counterparts. On American presidential campaigns, you find young people quote Mario Cuomo regularly and reverentially. Ask the average young Irish person to quote a politician they admire, and you might get a wry reference to living beyond our means.

The irony is that the Irish political system is sympathetic to change. Electoral constituencies are small enough that a localised, youth-led movement could have tangible results on an outcome, and multiseat constituencies make it easy to ensure representation. But the best way to ensure a “more of the same” outcome is to be cynical around election time. Just look at the most recent election. Young people thought that their only weapon was the ballot, and now we not only have no substantive change, but no government at all.

Harry Higgins is from Dublin and was a precinct captain in Iowa and Nevada as part of the Biden for President campaign.

1 Michael Smurfit: ‘I asked Trump to invite me to the White House for my 80th birthday’
2 The strain is starting to tell on Brendan O’Connor
3 We need to pay very close attention to what is happening in Britain now
4 Coronavirus: HSE experts support the early reopening of schools
5 Small businesses are cannon fodder in zealous anti-virus experiment
Real news has value SUBSCRIBE