After helicopter attack, Venezuelans ask: what was that about? 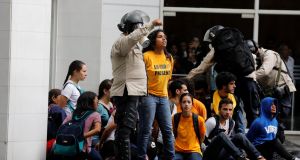 It was an outlandish attack on Venezuela’s centres of power: A police helicopter swooped down from a clear sky while someone inside dropped grenades on the supreme court and opened fire on the interior ministry.

The rogue police officers inside the craft waved a banner that referred to an article in the constitution that allows for civil uprisings against tyrants. But if the assault Tuesday was meant as a call to arms, it instead perplexed Venezuelans who have been protesting against the government and a devastating economic crisis.

Demonstrators took to the streets Wednesday, many voicing admiration for the stunt, but also wondering why anyone would engage in such a hapless attack. The police stayed in their precincts, showing little support for the dissident officers.

Some people even wondered whether the government had somehow orchestrated the events as a distraction. “I wanted to cry,” said Vanessa Furtado, a 46-year-old swimming teacher, who saw the helicopter arrive and its occupants wave their banner – and for a moment thought the security forces were taking the side of protesters.

But by Wednesday afternoon, as the government began to use the attack to intensify its threats against the demonstrators, Furtado started to have doubts. “I wanted it to be true,” she said. “But I had to ask myself if this had all been staged or wasn’t coming from the government.”

On Wednesday, officials said they had located the helicopter, releasing a picture of it in a misty banana field. But there were no signs of the attackers. The event underscored the frustrated nature of Venezuela’s protest movement, which has continued unabated since April.

Sustained unrest has left more than 70 people dead, mobilised thousands daily and militarised the country under the National Guard, resulting in even more instability than before.

President Nicolás Maduro, the target of the protesters’ ire, has responded with a steady stream of repressive actions, ordering the security forces to shoot at crowds with rubber bullets and rounding up hundreds to be sent to military tribunals. But unlike the leaders of Egypt or Turkey, Maduro has not yet ordered the kind of crackdown that could crush the opposition.

The protesters have drawn hundreds of thousands of supporters, shutting down streets and paralysing Caracas, the capital, with regularity. But while demonstrators in Ukraine, at the height of their uprising, toppled their government in a matter of days, Venezuelans confront a president who is simply digging in.

The narrative of rogue security forces in a helicopter offered another approach: armed revolt from within. But for now, that does not seem to be a viable path. “My sense is what happened yesterday was so bizarre that most Venezuelans don’t know what to make of it or know who to blame,” said David Smilde, an analyst at the Washington Office on Latin America, a human rights group. “Venezuelans in general don’t respond positively to military coups.”

Recent history has offered examples. In 1992, Hugo Chávez, then an army lieutenant, joined fellow officers in an uprising that was crushed by other military forces, and Chávez was jailed. Six years later, he turned to democratic means to gain power, winning the presidency.

In 2002, members of the military who opposed Chávez’s changes deposed him for a brief period and a new president was installed. But Venezuelans who supported Chávez took to the streets, and he was quickly reinstalled. “In the current context, most Venezuelans prefer an electoral solution to the crisis,” Smilde said. But without one in sight, the unrest continues.

The helicopter attack was just one example this week of the country’s strained institutions fighting each other. On Wednesday, the supreme court barred Luisa Ortega, the attorney general, who opposes Maduro, from leaving the country and froze her bank accounts. The court said it had done so because it was investigating her for misconduct, a process that could lead to her removal from office.

“There’s an attempt to nullify the office of the attorney general,” Ortega said at a news conference on Wednesday before the announcement. “We have lost the right to protest; they judge civilians in military courts, raid homes with no warrants.”

Members of the National Guard spent much of Tuesday blocking the entrance to the National Assembly, which is controlled by Maduro’s opponents. In a video circulated online, Julio Borges, the assembly speaker, can be seen engaged in a heated argument with a National Guard commander who is blocking a door. The commander aggressively shoves the lawmaker out of the doorway, and Borges nearly falls.

But those who saw the helicopter attack Tuesday were still expressing bewilderment about what had happened. Furtado, the swimming teacher, recalled that she saw tears in the eyes of many who were there. “A woman started to cry and got on her knees and said: ‘Now the powers that be are with us, with the people. It might end right now for all of us,’” she said.

But the attack appeared to have been carried out by rogue security personnel with no visible support in the military. A video posted that day showed a uniformed man named Oscar Pérez, flanked by heavily armed men, taking responsibility for the attack and urging more action.

Yet doubts about the attackers’ motives are surfacing. Cliver Alcalá, a former general who now opposes Maduro, said it was impossible to believe that the attack could have been launched by dissidents. “It’s not conceivable that someone with a helicopter could take off and attack the government with a grenade – it just doesn’t make sense,” Alcalá said.

He said he suspected that Maduro might have been complicit in the attack, seeking to use it as proof that his opponents had resorted to terrorism.

Others felt the rogue officers had good intentions. “I think he was a brave man,” Daniela Díaz, a 31-year-old dentist in the capital, said of Pérez. But Díaz admitted that she found the strategy a bit odd. “I think it was all very strange, the bombs, and so on,” she said, “but if you ask me now, I think it was for real, and if it’s a question of supporting them, then we would support them.”