Unlike parts of Ireland, Greece refuses to sell its soul

Greece is part of an ‘other’ world, a world still capable of miracles 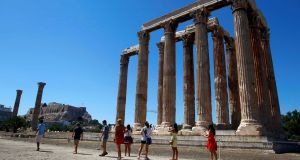 When I recently outlined the current Greek situation vis-a-vis the EU and Turkey, an online response accused me of a “whingeing argument”. The Greeks “are the people who won’t pay taxes, want to retire at 45 and while refusing to deal with past borrowing want more money from compliant EU taxpayers who must work till they are 68”.

Such generalisations are unkempt. It’s like saying “One Irish person is dishonest, therefore all Irish are dishonest”. Are not cherry-pickers, joyriders, free-loaders present in any society?

A study by the German political education institute, the Rosa Luxemburg Stiftung, on “What Greece has actually done to deal with the crisis” dismantled many of this reader’s myths and preconceptions about Greek deceptiveness, overspending, and overgenerous pensions.

At the same time, no one would condone the fecklessness of politicians and their advisers who created this mess, alongside the German banks that encouraged Greek debt to accrue, or the super-rich who live tax-free, or the bureaucracy that stifles Greek innovation, creativity and exports.

A leadership contest is of little interest to those living below the poverty line, as 25 per cent of Greeks do

At the top end of the crisis is a catch-22 situation where each time Greece edges towards a plan that would satisfy the EU, a squabble between Germany and the IMF muddies waters that were about to become clear.

Perhaps the plight of the million refugees from civil wars, terrorism and neo-imperialism who have passed through Greece is small potatoes on the world scale. The plight of 11 million Greeks suffering the financial consequences of political chicanery and wrong-footed economics is of less interest to those living in bourgeois security than the plight of the denizens of Fair City.

You can’t look at the Greek condition without history: centuries of domination by the Turks caused inbred fear, insecurity and envy, as well as a tendency to deception and to overstate one’s case. This, at least, should strike a chord in the Irish experience.

Greece is, and always has been, a land of contrasts and contradictions. Sophisticated elegance and primitive brutality. A recent visit to Dublin showed me that Ireland is also very much in two worlds, exemplified by the tourist industry selling its history and its soul: the dilemma of how to be authentic and at the same time obey market forces.

Ireland exited the bailout crisis more successfully because it has the capacity to generate wealth – something that is practically unknown in Greece. Irish middle-class values predominate, whereas in Greece, despite urbanisation, each Greek carries a village in her heart.

I have frequently mentioned the Greek capacity for resilience, for hope where hope often looks futile. Recently a young woman wrote to me about the Easter festival, the central point in the Greek calendar, illustrating, more beautifully than I have ever read, how Greeks, whether religious or not, can find a path towards the light:

“You see, for us, Easter time goes beyond religion. It’s a feeling of rebirth, it’s childhood memories, it’s the past merging with the present, it’s the hope for the future. It’s my 16-year-old self being part of the procession and my older self still there, not a student any more, but a happy teacher. It’s the joy of growing older, of having another chance to live the childhood dreams, to be here, one more year of living!

“It’s the music of the marching bands, over and over the years, touching our souls forever. It’s the mystery of nature awakening a chance for our own reawakening. It’s fireflies, thousands of them and flower scents all over. We love our Easter because we feel it, we smell it, we live it. It’s our ancestors and our descendants who share this same feeling.

“It’s the Resurrection when the skies light up and we feel this joyful excitement! It’s this happy time when one becomes a part of a miracle world!” And then she concludes, “For tourists it’s just a holiday destination with colourful celebrations, photos and Facebook posts.”

The crucial question is whether Greece – and indeed the entire Balkan region – should be expected to become a modern, plutocratic, westernised society or remain what it is: part of an “other” world, a world still capable of miracles. Those who believe there is a middle way would do well to look elsewhere than Ireland.