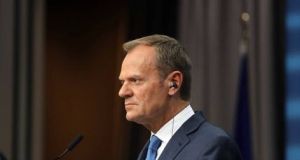 EU Council president Donald Tusk: he said “the offer is below our expectations, and risks worsening the situation for our citizens”. Photograph: Getty Images

There was a mixed response on Friday at the EU summit to Theresa May’s offer on the post-Brexit rights of the 3.2 million EU citizens in the UK and the 1.2 million Britons living in EU countries.

German chancellor Angela Merkel told reporters that the offer, made at dinner in Brussels on Thursday night, was “a good start”, though president of the EU Commission, Jean Claude Juncker, said it was “a first step but not sufficient”.

Taoiseach Leo Varadkar welcomed the “positive” proposals, but said an evaluation would have to await more detail.

The EU Council president, Donald Tusk, said “the offer is below our expectations, and risks worsening the situation for our citizens”.

The issue is a crucial third strand in the priority “divorce” talks that the EU and UK started on Monday. Substantial progress by October on this and the issues of the British Brexit bill and the Irish Border will allow the second phase of discussions on the “future relationship”, ie trade, to begin.

There was clear common ground. The idea of guaranteeing the rights of EU citizens after five years of residency chimes with the EU position, as does the key requirement of reciprocity – equal treatment of both groups. But May, who will elaborate on her proposals on Monday in the Commons, has so far left many questions unanswered.

On Friday she reiterated to journalists at the summit her words to EU leaders that this was “a fair and serious” offer, and that she was determined to provide reassurance to those who had made their homes in the UK that none of them would have to leave.

She said the contentious issue of the jurisdiction of the European Court of Justice in guaranteeing such rights was a matter for the negotiations, though she insisted the rights would be protected by the “highly respected UK courts”.

Most concerns focussed on her ambiguity about the cut-off date after which new arrivals in the UK would no longer qualify for “settled status”. The EU is likely to want the cut-off to correspond to the UK’s departure from the EU in March 2019. But the absence of a date has led some to speculate that the UK may wish the cut-off to be as early as 2017. May said on Thursday that it had not yet been determined.

And which rights will be extended to immediate family members living elsewhere – to children in particular?

And if ultimately there is no Brexit deal with the EU and the UK just walks away, nervous EU citizens in the UK will wonder if any of the May offer will stand. Their position could be very vulnerable. Despite her professed desire to bring some certainty to their predicament, she has not done so.

The BBC reported on Friday that “Europeans living in the UK said they are still panicked” and the proposals give “more questions than answers”.

Earlier, former UK chancellor George Osborne revealed in the Evening Standard, of which he is now editor, that May single-handedly blocked a post-referendum plan immediately to guarantee those future rights last summer. The then home secretary was the only member of the cabinet to oppose a proposal from David Cameron who “wanted to reassure EU citizens they would be allowed to stay”. May has said was not her recollection.