Analysis: Helsinki meeting will go down as a historic low point in US diplomacy

Speaking after a one-on-one meeting in Helsinki with Vladimir Putin, Donald Trump contradicted US intelligence agencies and said he saw no reason to believe Russia had hacked the 2016 presidential election to help him win. Video: Reuters 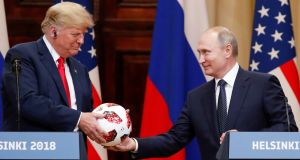 US president Donald Trump receives a football from Russian president Vladimir Putin at a joint news conference after their meeting in Helsinki, Finland. Photograph: Grigory Dukor/Reuters

The relationship between the US and Russia has been transformed, President Donald Trump insisted on Monday to a sceptical world press in Helsinki. “Relations with Russia have never been worse than now. However, that changed four hours ago.”

Trump and Russia’s president Vladimir Putin both held out the prospect of a new era of fruitful co-operation between the two countries. The two-hour one-on-one meeting, what Trump  called “strong open dialogue”, at this first official meeting with Putin was, however, more hype than substance.

A meeting which in Russia will be portrayed as a propaganda victory for Putin, a relegitimisation of Russia’s role and great power standing on the world stage, an end to its pariah status in the international community.

A meeting which has horrified allies in Europe – Trump’s “foes” – for its demonstration of US appeasement of a Russia they see as a major strategic and economic threat, and of an autocratic leader who has interfered in the US’s own elections.

Putin tried to list the areas where the “very fruitful” talks had produced results, a long list but short of any specifics: nuclear non-proliferation, the strategic arms limitation treaty, the non-deployment weapons in space, co-operation against terrorism and cyber warfare, co-operation in ending the Syrian refugee crisis and co-operation to protect Israel at the major flashpoint with Syria in the Golan Heights, North Korea – with special thanks to Trump’s initiative – and so on.

Trump promised the US and Russia “could save hundreds of thousands of lives” in Syria. 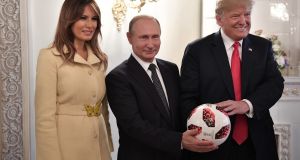 London will note with concern the absence of any reference to the chemical weapons poisoning of the Skripals.

Ukrainian diplomats reacted with outrage to what they saw as Trump selling the pass on Crimea, the invasion of which was denounced again as illegal by Nato only days ago. “The posture of President Trump on Crimea is well known and he stands firmly by it,”a clearly unconcerned Putin said. “He continues to maintain that it was illegal to annex it, our viewpoint is different.”

Everything about the encounter was odd, even bizarre – billed initially as a summit, Trump then reduced its status to that of a “meeting”. And Trump excluded even his most senior aides, secretary of state Mike Pompeo, and John Bolton, his national security adviser, from his initial one-on-one meeting with Putin. No one to record any agreements? Or the absence of disagreements.

There was almost no US preparatory work for the talks, little if no briefing for Trump, and no explicit agenda, just a few things that Trump suggested they might talk about: trade, the military, missiles, nuclear, China – “our mutual friend, President Xi” .

But chemical weapons attacks on the UK, Ukraine and the annexation of Crimea, climate change . . . No mention. Trade got a mention, only to see Trump again defending US commercial interests against Germany by denouncing the Nord Stream 2 pipeline project in the Baltic.

On his way to Helsinki, Trump was sending very mixed messages that even blamed Democrats, not Russians, for the poor state of US-Russia relations.

He told journalists in Brussels that the meeting with Putin was going to be the easy bit of his European trip.

And  he tweeted, apparently overlooking the cold war when the two great powers  hovered on the brink of nuclear war, that “Our relationship with Russia has NEVER been worse thanks to many years of US foolishness and stupidity and now, the Rigged Witch Hunt!”

Earlier the president repeated his claim that Barack Obama had failed to act over the Russian cyber attack in 2016. He wrote on Twitter that Obama “thought that Crooked Hillary was going to win the election”, so he did “NOTHING” about it when informed by the FBI.

He said he was heading to the talks with low expectations – “I think that getting along with Russia is a good thing, but it’s possible we won’t”, setting the bar so low that the very fact of the meeting would justify claims of a personal triumph.

But even with such low expectations, the fiasco of Trump’s press conference will ensure the meeting will go down as a historic low point in US diplomacy.