The streets of Paris came to a standstill as tens of thousands of fans celebrated France's World Cup final win over Croatia. Video: Reuters 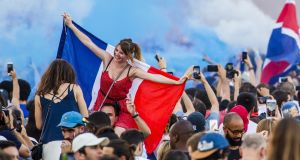 French supporters celebrate on the Champs-Élysées after their team’s victory over Croatia in the World Cup final. Photograph: Christophe Petit Tesson/EPA 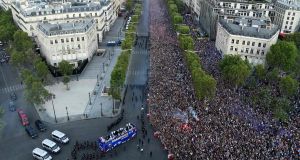 An aerial view of fans greeting France’s national soccer team as they parade on a bus down the Champs-Élysée in Paris. Photograph: Bertrand Guay/AFP/Getty Images 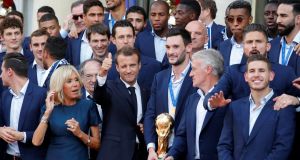 French president Emmanuel Macron and his wife Brigitte Macron pose with the France soccer team before a reception to honour the squad after their victory in the 2018 World Cup, at the Élysée Palace in Paris. Photograph: Philippe Wojazer/Reuters

France’s young, World Cup-winning soccer team staged a victorious homecoming parade on Monday in an open-top bus down the Champs-Élysées, as hundreds of thousands of supporters wrapped in flags cheered them on.

The team’s 4-2 win over Croatia in Moscow on Sunday has cemented France’s reemergence as a soccer superpower and brought the country together.

On Monday, the squad was driven down the packed central avenue in Paris, as they smiled and waved and held up the cup as the French air force staged a flypast amid plumes of red, white and blue.

City-centre Parisians and others from the capital’s banlieue suburbs swapped flags and sang the national anthem with others who had travelled from across the country for the occasion.

On Sunday night, after the final whistle blew in Moscow, up to 1 million supporters had gathered on the Champs-Élysées. Throughout the night and into Monday cars sped around Paris with people leaning out of windows waving flags.

Sissoko (32), from the eastern outskirts of Paris, not far from where Paul Pogba grew up, brought his sons, Sadia (8) and Hanet (6), to catch a glimpse of the team. “This is a big moment for the kids; it shows what they can dream of, who their role models can be,” he said.

France has traditionally placed more pressure than most other countries on its soccer team as a national symbol that can fix society’s ills. The mood of unity and positivity that this diverse French team has brought has been seen as a balm for a divided nation hit by terrorism, and where the far-right Marine Le Pen won more than 10 million votes in last year’s presidential election.

The mood was different to 20 years ago, when France won the World Cup on home soil. That year, Zinedine Zidane’s diverse team was held up as the magic fix to France’s deep-seated discrimination and identity issues, with the team labelled “black, blanc, beur” – black, white, Arab.

This time, politicians accepted that it had been folly in 1998 to expect the result of a soccer match to do so much. Indeed, four years after the last win, Marine Le Pen’s father Jean-Marie Le Pen, who had complained there were too many black people on the team, made it to the presidential run-off.

Instead, as the team bus moved past cheering crowds on the Champs-Élysées, supporters said each player should be seen as an inspiration, emphasising the places where the players had grown up, from poor suburbs to rural towns.

“We’re not in 1998,” said Mounir Mahjoubi, the secretary of state for digital affairs, whose parents were born in Morocco. “We’re not still celebrating ‘black, blanc, beur’, we’re celebrating brotherhood,” he said of the team.

“This team is proof that today our generation doesn’t see differences, not in race, age or background – everyone is the same,” said Daphné Bada (18), who with her friend Cyrona Ramdani (17) had come in from a banlieue for the event. Both were about to start university degrees. “This is a historic moment. We had to be here.”

Eric (45), who worked as a health and safety officer in Amiens, northern France, had brought his two sons, aged 10 and 12. “Today is all about being proud to be French,” he said.

Graffiti in the city included the slogan “Liberté, egalité, Mbappé”, a reference to the national motto and Kylian Mbappé. The 19-year-old star of the World Cup comes from Bondy in the Paris suburbs and the sports minister Laura Flessel said he had allowed young French people in the suburbs “to dare to believe in their dreams”.

The French president, Emmanuel Macron, who recently dipped in polls following accusations that he is not doing enough for those most in need, also hosted the team at the presidential palace. At the match in Moscow, he had been pictured in shirt-sleeves punching the air, hugging the players on the pitch, and then addressing them in their dressing room.

He told the team: “Kids, a big thank you, you allowed us to dream . . . 66 million French people watched you, you are an example for all those young people, and that’s going to last all your life. You will never be the same.”

There were some disturbances on Sunday night, with riot police firing teargas when a small number of people threw stones at and broke into Publicis Drugstore on the Champs-Élysées, with police later clearing the area with water cannon. The interior ministry said there had been 292 arrests across France overnight.

Mr Macron invited hundreds of young soccer players from the poorer suburbs of Paris, where several of the French team began playing the game as children, to the presidential reception for the squad.

Pogba led the team in several chants on the steps to the palace garden. Mr Macron told the team: “Never forget where you’re from. You’re from right here,” gesturing to the soccer trainers and volunteers from youth teams in the suburbs who had been invited.

Mr Macron may be hoping his approval ratings will rise on the back of the victory. After the 1998 win, the unpopular right-wing president Jacques Chirac enjoyed a boost in the polls. A poll for Le Journal du Dimanche before the World Cup final found that the majority of French people felt the soccer results had boosted the national mood.