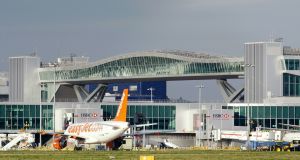 The chief constable revealed that two drones found by police near the airport have now been ruled out of responsibility. Photograph: Adrian Dennis/AFP

The chief constable of Sussex police has said he feels “really sorry” for a couple who felt “violated” after being held for 36 hours before being cleared of involvement of the disruption of Gatwick Airport by drones.

However, Giles York said that the ability of the police to declare that Paul Gait and Elaine Kirk were no longer suspects should allow them to get their lives “back on track”.

Mr York revealed that two drones found by police near the airport have now been ruled out of responsibility for the disruption which saw around 1,000 flights cancelled or diverted over three days before Christmas.

He told BBC Radio 4’s Today programme that police have not yet found the drone involved and did not know its model.

He insisted, though, that he was “absolutely certain” that a drone was flying near the runways during the three-day period from December 19th to 21st when the airport was repeatedly forced to close.

Police received 115 reports of sightings in the area, including 92 which have been confirmed as coming from “credible people”, he said.

But he acknowledged that there may have been some “confusion” caused by the fact that Sussex Police launched its own drones in the hunt for the craft which was causing fears for safety of planes.

Mr York confirmed that military technology had been installed at Gatwick following last week’s incident, “dramatically” improving security at the airport. But he acknowledged that he could not rule out future disruption of the same kind.

The Chief Constable said he was “really sorry” for the couple from Crawley, West Sussex, who were detained in the wake of the disruption, but said that the grounds for arrest were “well founded” in lawful suspicion.

He defended the decision to hold Mr Gait for an extended period, despite his employer saying he was at work during the drone flights.

“I’m really sorry for what he has experienced and the feeling of violation around it,” Mr York told Today.

“I am really sorry for what he went through, but the reason why we held him was so that we could dispel everything in the first instance. What might have been worse as an experience for him would have been to be released under investigation still.

“We are able to exhaust all our lines of inquiry on that first instance and, however hard it is, able to release him from police custody saying he is no longer a suspect in this line of inquiry.

“That’s why we took the time — in order to allow him the best opportunity to put his life back on the rails.”

Mr York said that a Sussex officer who suggested that police were not sure whether there was a drone flying at Gatwick at all was simply trying to explain the investigative approach taken by the force.

“I am absolutely certain that there was a drone flying throughout the period that the airport was closed,” he said.

Describing the police investigation as “incredibly thorough”, he said: “I don’t think we have found the drone responsible for this at this time.

“I think the fact that we have found two drones so far as a result of this does show the extent of the search that has been carried out. I am led to believe that we are able to rule those drones out of this investigation at this time.”

Mr York confirmed that military technology was now in place at Gatwick, though he declined to identify the nature of the equipment.

“The systems that are in place today are dramatically different to what was in place a week ago,” he told Today.

Asked whether he could rule out a repeat of last week’s disruption, Mr York said: “I don’t think you can ever rule out anything happening again.

“But what we can say is what is at the heart of this is ensuring it is safe for the aircraft to take off and that’s the different position that Gatwick Airport finds itself in today.” – PA