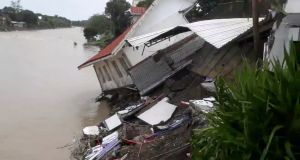 A destroyed house is seen after a tropical depression descended upon Daet, Camarines Norte, the Philippines on Sunday. Photograph: Reuters

At least 22 people have died due to landslides and flooding triggered by a tropical cyclone that brought heavy rains to central Philippines, a disaster agency official said on Sunday.

The people, including a three-year-old boy, were reported dead as of Sunday morning, said disaster agency spokesman Edgar Posadas, after a tropical cyclone barrelled through the eastern Visayas and Bicol regions on Saturday.

“The wind was not strong but it caused flooding and landslides,” Mr Posadas said.

The number of casualties could rise as rescue and retrieval operations continue. Local media have reported dozens missing or trapped by the landslides.

A regional office of the disaster agency said it was working to confirm the deaths of 38 people in the Bicol region, located south of the main island of Luzon.

Thousands of passengers were stranded at seaports, airports and bus terminals as dozens of inter-island trips were cancelled.

The tropical depression, which has since been downgraded to a low pressure area, left the Philippines on Sunday afternoon.

About 20 tropical cyclones hit the Philippines every year. – Reuters