Merkel to win refugee standoff with CSU, according to poll 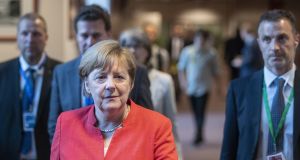 Germans expect chancellor Angela Merkel to emerge victorious on Sunday from a refugee standoff with her Bavarian allies that has threatened her Berlin coalition.

Two-thirds of people also expect the 69-year alliance between her Christian Democratic Union (CDU) and Bavaria’s Christian Social Union (CSU) to survive a standoff on asylum.

A ZDF public television poll released on Friday found that 61 per cent of Germans expect the chancellor to beat back a challenge from the Bavarian CSU, a certainty that rises to 72 per cent among the CDU/CSU voters.

The same poll showed a CDU/CSU slip in support of one point, while the far-right Alternative für Deutschland (AfD) has picked up a point.

After his heated standoff with Berlin on refugees, Bavarian state premier Marks Söder declined to be drawn on what to expect from party meetings on Sunday.

He insists his CSU is determined to secure German borders and end breaches of asylum law. But just 28 per cent of voters believe him, the poll suggests, with almost two-thirds (65 per cent) perceiving the motivation as CSU political concerns ahead of an October state election.

While the CSU threatened with national border closures for some asylum seekers, 91 per cent of Germans back the Merkel position that the refugee crisis can only be solved through European co-operation.

Despite the good news in the ZDF poll, the refugee row with her Bavarian allies has come at a price. Satisfaction with her fourth-term government has slumped some 16 points in three weeks to just 49 per cent now.

German president Frank Walter Steinmeier warned on Friday that rhetorical “wounds” left by the CDU and CSU on each other in recent weeks “will be difficult to heal”.