‘We even offered to blur Heidi Allen’s face and replace her voice. Apparently that ‘wasn’t helpful’’ 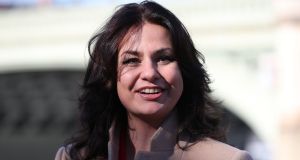 The BBC pulled the latest episode of Have I Got News For You after the broadcaster said it would have been ‘inappropriate’ for Change UK leader Heidi Allen to be a guest. Photograph: PA 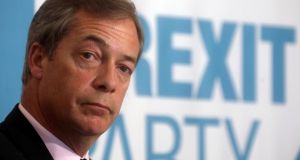 The BBC pulled the latest episode of Have I Got News For You television show last night after the broadcaster decided it would have been “inappropriate” for Change UK leader Heidi Allen to be a guest ahead of the European elections.

The comedy quiz show, which airs on BBC One and questions guests on the week’s top news stories, tweeted shortly before the pre-recorded programme was due to air to say it had been withdrawn.

The broadcaster referred to its editorial guidelines after they announced the episode of the panel show, with Ian Hislop and Paul Merton, would be broadcast at a later date.

“The BBC have pulled tonight’s edition of #HIGNFY - no, we didn’t book Danny Baker.

“We booked Heidi Allen, a member of a party no-one knows the name of (not even the people in it), because the Euro elections, which nobody wants, may or may not be happening.

Scheduled for 9pm on BBC One, the show was replaced with Would I Lie to You?, which should have aired afterwards.

Sorry everyone. The BBC have pulled tonight’s edition of #HIGNFY - no, we didn’t book Danny Baker. We booked Heidi Allen, a member of a party no-one knows the name of (not even the people in it), because the Euro elections, which nobody wants, may or may not be happening.
Sorry.

In response, Twitter users pointed out that Brexit Party leader Nigel Farage had been a panellist on BBC Question Time on Thursday.

Following the announcement, Ms Allen, who left the Conservatives alongside her colleagues Anna Soubry and Sarah Wollaston earlier this year to join the new party, said an explanation was needed.

The MP for South Cambridgeshire tweeted: “Maybe I’m just not as funny as Nigel Farage eh #hignfy haveigotnews !? He’s so funny, he seems to be on the BBC all the time!

“An explanation would be appreciated, not least to acknowledge the hard work of the entire crew who worked diligently to put the show together.”

European Parliament elections will take place in the UK on May 23rd.

A BBC statement said: “The BBC has specific editorial guidelines that apply during election periods.

“Because of this it would be inappropriate to feature political party leaders on entertainment programmes during this short election period, which does not allow for equal representation to be achieved.

“So we will not broadcast the scheduled episode of HIGNFY featuring Heidi Allen, leader of Change UK. We will look to broadcast this episode at a later date.”

A Have I Got News For You source said: “The BBC told us late this afternoon that they had decided to pull the show. This was because Heidi Allen was on the panel, and, in their judgement, we’re officially in an election period. And she’s officially a party leader.”

The source added: “We tried everything we could to get the BBC to broadcast it. We even offered to blur Heidi Allen’s face and replace her voice with an actor. Apparently that ”wasn’t helpful“.

“It was a cracking show, and everyone at Hat Trick is sorry you’re not going to see it tonight. We’ve always felt that HIGNFY is at its best when it bites the hand that feeds it. We’re delighted the BBC appears to continue to agree.

“We wouldn’t usually discuss our plans for next week’s show this far in advance. But I reckon this story will probably come up. Do tune in. We’ll be on next Friday at 9 on BBC1. Probably. ”

The source also claimed that someone from the BBC Editorial Policy Unit had attended the recording, but a spokesman from the corporation said that was not the case, although a lawyer had been there to check for issues such as defamation or contempt. - PA