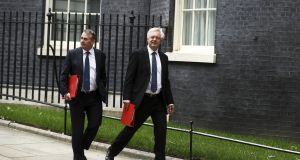 The whole of the United Kingdom would effectively remain in the EU customs union and aligned to single market regulations under a proposal from Theresa May’s government for a backstop to avoid a hard Border.

The four-page document, which was the subject of heated disagreements within the cabinet, states that the backstop should be time-limited and that London expects it to last for just a year after the end of a transition period that will follow Brexit.

Last March, British and EU negotiators agreed that the backstop should apply “unless and until another solution is found” to avoid a hard Border in Ireland. Ms May’s official spokesperson said on Thursday that the new proposal is consistent with that commitment.

The document’s publication was delayed by a dispute between the prime minister and her Brexit secretary, David Davis, who insisted that it should specify the date on which the backstop would end. Ms May held separate meetings on Thursday morning with Mr Davis and two other Brexiteer ministers, foreign secretary Boris Johnson and international trade secretary Liam Fox.

Amid reports that Mr Davis threatened to resign from the cabinet, he met the prime minister for a second time on Wednesday before the document was published.

Labour’s shadow Brexit secretary Keir Starmer said it had been another embarrassing day for the Conservative government over Brexit.

“The clock is ticking on the Brexit process and it is imperative that an agreement is struck which will protect jobs, the economy and ensure there is no hard border in Northern Ireland. Instead, with the threat of a Cabinet resignation, Theresa May has signed up to a flawed proposal which is inconsistent with her earlier commitments,” he said.

The document says that Britain would continue to apply the EU’s common external tariff but would be able to negotiate and sign new trade deals, “and implement those elements that do not affect the functioning of the temporary customs arrangement”.

It acknowledges that a backstop arrangement will require an agreement on regulatory standards which will have to be addressed elsewhere.

Meanwhile, British foreign secretary Boris Johnson has claimed the debate about solutions to the Border post-Brexit had been “blown completely out of proportion”.

“It’s so small and there are so few firms that actually use that border regularly, it’s just beyond belief that we’re allowing the tail to wag the dog in this way,” he told party colleagues, according to an audio recording obtained by BuzzFeed News. “We’re allowing the whole of our agenda to be dictated by this folly.”

Mr Johnson claimed a solution that allowed for trade with “our continental friends and partners” that was “as frictionless as possible” could be found easily.

“The principle that is in the existing backstop that is supported by the 27 EU member states is that it applies at least until there is an alternative in place,” Mr Varadkar told reporters before the British government published its proposals. “It is not something that can be just time-limited.

“It has to be as they say ‘all weather’, it has to be applicable until such a time if and when there is a new relationship between the EU and UK that prevents a hard border.”