Government planning for ‘worst-case scenario’ on extradition with UK

Extradition arrangements could break down after Brexit, warns Department of Justice official 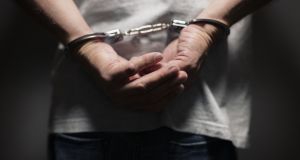 There could be a “very significant” deterioration of co-operation between Dublin and London, causing “immediate and serious problems” in dealing with criminals and terrorists. Photograph: iStock

The Government is preparing for a “worst-case scenario” of extradition arrangements with Britain breaking down entirely after its planned pull-out of the EU in less than a year’s time.

And it fears a “very significant” deterioration of co-operation between Dublin and London, causing “immediate and serious problems” in dealing with criminals and terrorists if the UK also exits a handful of key EU-wide conventions.

Under the European Arrest Warrant (EAW) system, police in any EU country can ask its counterparts in another member state to arrest a criminal suspect and return them for prosecution.

The process takes as little as 48 days to complete at present.

Documents from the Department of Justice show assistant secretary James Martin, head of international policy, briefed staff that the “best-case scenario” for extradition post-Brexit is the transfer of accused criminals taking “four or five years”.

“This is not an understatement. Before the EAW, there were a whole series of cases where people were not extradited to the UK because it was regarded as political or courts said a person would not get a fair trial.

“There was practically no extradition between Spain and the UK.”

Last week, a senior EU figure told journalists during a briefing in Brussels that Britain would not legally be able to continue in the EAW system after it leaves the bloc.

Several appeals are already before the courts in both the UK and Ireland challenging extradition on the basis of Brexit.

In a separate discussion on the matter, Mr Martin told criminal justice figures last October that the UK’s decision to exit the EU had “alarmed” his department.

Notably, the UK’s insistence on ending the jurisdiction of the European Court of Justice will “pose serious and complex obstacles” to close co-operation between the two countries, he said.

It could take between “10 to 15 years before new agreements enter into force”, he told a private meeting of the Association for Criminal Justice Research and Development, his speaking notes show.

The figure is based on the length of time it took for Norway and Iceland to negotiate a “surrender agreement” with the EU, which remains subject to a political clause.

The “fall-back situation is the 1957 Council of Europe Convention on Extradition,” which “has many flaws”, he said.

In a heavily redacted release of the department’s official assessment of the impact of Brexit, it says there will be a “noticeable practical effect” on Ireland through more than 700 EU regulations, directives and other instruments .

Some 86 were identified as needing immediate attention, but a handful – including the EAW, Mutual Legal Assistance, Europol and the Prum convention on cross-border co-operation on crime and terrorism – are deemed among the most important.

“If the UK was to exit all these instruments, the level of criminal justice and police co-operation between Ireland and the UK would be adversely affected to a very significant degree for both ordinary crime and terrorism,” it states.