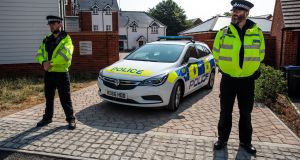 Police on the scene at Muggleton Road where a major incident was declared after a couple were exposed to the Novichok nerve agent. Photograph: Jack Taylor/Getty Images 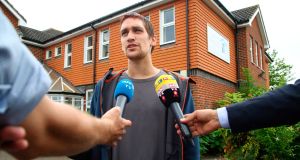 Sam Hobson, a friend of the couple that were poisoned, talks to the media outside the Amesbury Baptist Centre in Amesbury, southern England. Photograph: Geoff Caddick/AFP/Getty Images

The victims of the Amesbury Novichok poisoning have been named locally as Dawn Sturgess and Charlie Rowley.

Here is what we know about their lives and movements before they were admitted to hospital:

The couple spent Friday afternoon and evening in Salisbury and visited a number of shops.

Friend Sam Hobson (29), said he spent the day with them and that Ms Sturgess (44), first went to hospital on Saturday at 11am.

Mr Hobson and Mr Rowley (45), then went to a number of places in the town centre and attended a church fair in Amesbury.

Mr Hobson said he later called an ambulance for his friend when he started “foaming at the mouth” after they had gone back to his home in Muggleton Road.

He said Ms Sturgess had been taken away on a stretcher and “she didn’t look very well at all, there was a thing in her mouth breathing for her”.

“She was on the floor having a fit and foaming at the mouth and that’s when he (Mr Rowley) started sweating really badly, so he had a shower and then he went to his room for a bit, got dressed, came out and was a bit tired, sat down for a bit and then that’s when he got up and started acting weird,” he told the Guardian.

“He said he felt he’d been poisoned... then he was rocking against the wall making funny noises and his eyes were wide open, glazed and pinpricked, and he was sweating, dribbling and making weird noises.

“I was speaking to him, getting no response. They thought first it was drugs but now they know it’s not the drugs.”

Mr Hobson said the police and fire brigade were in “hazard suits and they cordoned it all off”.

Ms Sturgess’s family said they found out that the mother-of-three may have been poisoned with a nerve agent from TV news.

Her father Stephen (65), told The Times: “We heard from the hospital on Sunday and we gave them Dawn’s GP details but we didn’t hear anything from the police.

“We found out about all this on the TV this morning (Wednesday), about it being a major incident.

“We know as much as the next person in the street. We actually called the police station for information.”

Salisbury City Council leader Councillor Matthew Dean said the pair were known to the authority and were on “the road to recovery” before they were poisoned.

“We’re thinking of them,” he said. “They’ve been through a very difficult time in their personal lives.

“They had their own demons and they were conquering them and they were well on the road to recovery. So it’s tremendously sad for the individuals concerned and we wish them a speedy recovery.”