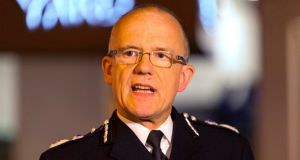 Britain’s most senior counter-terrorism officer Mark Rowley has said the police’s “fast-paced investigation” was working on the assumption that the attack was “Islamist-related terrorism”.

Explaining why Mr Palmer was unarmed, Mr Rowley said: “Our parliamentary protection team are a combination of armed and unarmed officers doing different roles, and sadly the officer who lost his life today was unarmed.

“He was supported by armed colleagues who shot and killed the attacker. He [the attacker] tried to enter parliament and was stopped at the gate.”

Mr Rowley said there was a “range of nationalities” among the injured, but refused to give further information about where they were from.

He praised the efforts of those involved, saying while it was an “incredibly sad and sombre day”, he felt “pride in the swift and brave response from our officers, especially those who had to confront the terrorist”.

London mayor Sadiq Khan said there would be additional police officers on the city streets to keep Londoners and visitors safe. “We stand together in the face of those who seek to harm us and destroy our way of life. We always have, and we always will. Londoners will never be cowed by terrorism,” he said.

Prime minister Theresa May, who described the attack as sick and depraved, said parliament would convene as normal on Thursday in a sign that the attack would not disrupt life in the capital.

However, a visit by Queen Elizabeth to officially open the new headquarters of London’s police force, which had been planned for Thursday, was postponed “in light of events”, Buckingham Palace said.

In a phone call with Ms May, US president Donald Trump offered Britain the full support of the United States.