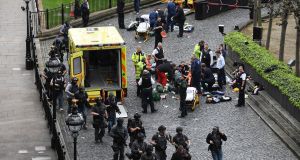 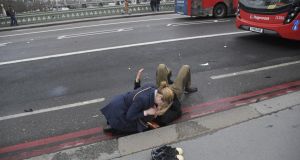 A woman helps an injured person after an incident on Westminster Bridge in London. Photograph: Toby Melville/Reuters 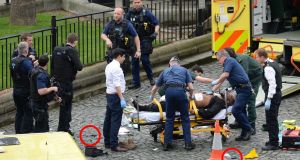 Paramedics tend to the alleged knifeman who ran over pedestrians and stabbed a police officer outside the Palace of Westminster. Two knives are seen ringed in red. Photograph: Stefan Rousseau/PA Wire 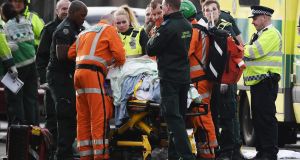 A member of the public is treated by emergency services near Westminster Bridge and the Houses of Parliament. Photograph: Carl Court/Getty Images 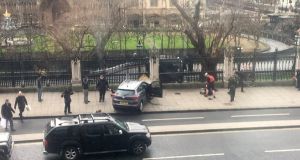 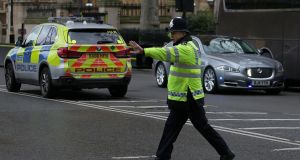 A police officer stops traffic as a Jaguar car carrying British prime minister Theresa May (R) is driven away from the Houses of Parliament in central London. Photograph: AFP/Getty Images 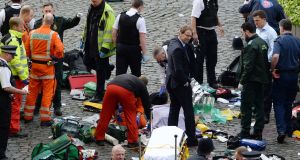 Conservative MP Tobias Ellwood (centre) stands amongst the emergency services at the scene outside the Palace of Westminster. Photograph: Stefan Rousseau/PA Wire 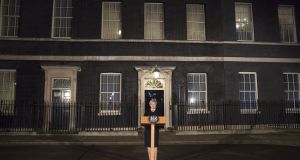 Five people, including a police officer, two pedestrians and a knifeman, have been killed in what police described as a “terror incident” at Westminster in London.

At least 20 people, including three French teenagers on a school visit to London, were injured, police said.

The attacker, described by one witness as an Asian man in his 40s armed with two large knives, mowed down pedestrians with a grey Hyundai i40 on Westminster Bridge before crashing into railings just outside Parliament.

He then rushed at the gates in front of the Houses of Parliament, fatally stabbing a policeman before he was shot by armed officers.

The police officer who died in the assault has been named as Keith Palmer.

Two of the dead were among those hit by the car as it tore along Westminster Bridge.

British prime minister Theresa May condemned the attack as “sick and depraved”.

“The location of this attack was no accident,” she said, in a statement outside her Downing Street office on Wednesday evening.

“The terrorist chose to strike at the heart of our capital city, where people of all nationalities, religions and cultures come together to celebrate the values of liberty, democracy and freedom of speech.

Any attempt to defeat those values through violence was “doomed to failure”, Ms May said.

Scotland Yard said the attack in London, which took place on the first anniversary of attacks on Brussels, was being treated as a terrorist incident.

Metropolitan Police Acting Deputy Commissioner and Head of Counter-Terrorism Mark Rowley said: “Sadly I can confirm that now four people have died and that included the police officer who was protecting Parliament and one man we believe to be the attacker, who was shot by a police firearms officer.

“This is a day we planned for but hoped would never happen; sadly, it’s now a reality,” Mr Rowley told reporters.

“We will continue to do all we can to protect the people of London.”

He said he “was satisfied” that there was just one attacker.

UK police later confirmed that they suspect the attack was motivated by Islamist terrorism.

One of the first on the scene was Foreign Office minister Tobias Ellwood - a former army officer whose own brother died in the Bali terrorist bombing in 2002 - who attempted mouth-to-mouth resuscitation of an injured police officer.

Colleen Anderson, a junior doctor at St Thomas’s hospital, said she treated a police officer in his 30s with a head injury, who had been taken to King’s College hospital.

Two are in a critical condition and six are in a stable condition.

A spokesman for the Port of London Authority, which looks after safety on the River Thames, said: “A female member of the public was recovered from the water near Westminster Bridge.

“She is alive but undergoing urgent medical treatment on a nearby pier. We believe she fell from the bridge.”

A sitting in the House of Commons was suspended while police officers sealed off the area near the incident.

MPs were told to wait in the Commons chamber as the sitting was suspended.

A Downing Street source declined to say where Ms May had been during the attack, but said she had not been involved.

She was later seen being driven away from Westminster in a silver Jaguar.

A car on Westminster Bridge has just mowed down at least 5 people. pic.twitter.com/tdCR9I0NgJ

"As I came out, I heard three shots" - the BBC's @EvanHD witnessed the #Westminster terror attack outside parliament https://t.co/LICEdoUTS1 pic.twitter.com/aq9ItXWT3S

“The thoughts of the PM and the government are with those killed and injured in this appalling incident, and with their families,” her office said in a statement.

Ms May chaired a meeting of the Government’s emergency Cobra committee on Wednesday evening.

No Irish people are believed to have been directly affected by the attacks, Minister for Foreign Affairs Charlie Flanagan said.

US president Donald Trump has spoken to Ms May about the attack, his spokesman Sean Spicer said, adding: “We condemn’s today’s attack.”

Parliament Square was closed to traffic and the Westminster Underground station was shut following the incident.

The London Eye tourist attraction, just across the Thames from Parliament,was also put on lockdown.

“We were just walking up to the station and there was a loud bang and a guy, someone, crashed a car and took some pedestrians out.

“They were just laying there and then the whole crowd just surged around the corner by the gates just opposite Big Ben.

“A guy came past my right shoulder with a big knife and just started plunging it into the policeman.

“I have never seen anything like that. I just can’t believe what I just saw.”

Witness Quentin Letts said he saw a man in black attack a police officer outside Parliament before being shot two or three times as he tried to storm into the House of Commons.

“I saw a thick-set man in black clothes come through the gates into New Palace Yard, just below Big Ben,” he told the BBC.

“He had something in his hand, it looked like a stick of some sort, and he was challenged by a couple of policemen in yellow jackets.

Another officer ran to get help and the man in black ran about 15m towards the entrance, he said.

“As this attacker was running towards the entrance, two plain-clothed guys with guns shouted at him what sounded like a warning, he ignored it and they shot two or three times and he fell.”

Alan Parry, of Sky Sports News, was at Westminster for a meeting when he heard “an almighty crash” when he was just outside the underground station.

He could see what he thought was a 4x4 vehicle on the other side of the road which had crashed into some railings.

He told Sky News: “There was smoke coming from this vehicle. I walked on a few paces further and saw what I assumed to be either a pedestrian or a cyclist who had clearly been hit and wasn’t moving, although he did then gently move.

“The guy who I assumed was the driver of this 4x4 got out of the car and suddenly sprinted away from the scene - that was followed by four of what sounded much like gunshots.

“All of a sudden all hell was let loose. Police descended everywhere and the whole area was locked down.”

Watching the incident unfold from the press gallery inside the Houses of Parliament, George Eaton, the political editor of the New Statesman, told Sky News: “I saw a large crowd fleeing the attacker, who appeared to be carrying a knife, fleeing him from close to the Tube station.

“He then entered the gates of Parliament and charged at officers. We now know that one of them was . . . stabbed. He was then very swiftly shot by armed police.”

Other witnesses described seeing a middle-aged man carrying a knife and running.

Jayne Wilkinson said: “We were taking photos of Big Ben and we saw all the people running towards us, and then there was an Asian guy in about his 40s carrying a knife about seven or eight inches long.

“And then there were three shots fired, and then we crossed the road and looked over. The man was on the floor with blood.

“He had a lightweight jacket on, dark trousers and a shirt.

“He was running through those gates, towards Parliament, and the police were chasing him.”

Her partner, David Turner, added: “There was a stampede of people running out.

“You saw the people and you thought, ‘What the hell is going on?’”

Witness Richard Tice said he “counted between eight and 10 prostrate figures on the ground” after he came out of Westminster underground station and moved on to Westminster Bridge following the incident.

He told Sky News: “My understanding from someone who was standing next to me was that a car had driven along the whole pavement knocking people over and that is why there were many injuries.”

Mr Sikorski, a senior fellow at Harvard’s Centre for European Studies, wrote: “A car on Westminster Bridge has just mowed down at least 5 people.”

Minutes after the incident, an emergency services helicopter landed in Parliament Square, as sirens were heard outside.

Air ambulance medics came from the helicopter to assist the casualties. Two people lay on the ground in the yard.

One of them appeared to have had clothes removed as emergency workers attempted to resuscitate the pair.

Running for their lives

Dennis Burns, who was just entering Parliament for a meeting when the security alert happened, told the Press Association: “As I was coming through the doors at Portcullis House, a policeman grabbed someone who was coming in and threw him out.

“As we were coming though the glass doors I was told by one security guard to get out while another one told me to get in.

“As I walked in I heard a security guard get a radio message saying ‘a policeman has been stabbed’.

“Then I walked in as police officers and security start rushing out of the front doors on to the street.

“When I got inside I was wondering what the hell was going on and I saw dozens of panicked people running down the street. The first stream was around 30 people and the second stream was 70 people.

“It looked like they were running for their lives.”

Britain is on its second-highest alert level of “severe”, meaning an attack by militants is considered highly likely.

In May 2013, two British Islamists stabbed to death soldier Lee Rigby on a street in southeast London.

In July 2005, four British Islamists killed 52 commuters and themselves in suicide bombings on the British capital’s transport system, in what was London’s worst peacetime attack.

* The Department of Foreign Affairs and Trade in Dublin said it was aware of an incident in central London and is monitoring developments closely through the Irish Embassy in London. Anyone with serious concerns may contact the Department of Foreign Affairs Consular Assistance Unit on 01-4082527 or, for those in London, the Consular Unit of the Irish Embassy on +44 207 2352171