EU warns Macedonia not to ‘play with fire’ on ethnic tensions 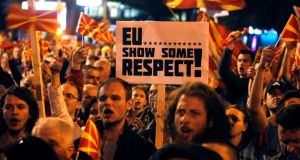 People protest in front of the parliament building in Skopje, Macedonia, on Tuesday, against the visit of EU enlargement commissioner Johannes Hahn and the bloc’s support for a proposed multi-ethnic coalition government. Photograph: Boris Grdanoski/AP

The European Union has urged Macedonia’s leaders not to “play with fire” by fanning ethnic tension, as a political crisis threatens to derail the country’s bid to join the bloc.

Tens of thousands of people protested in the Macedonian capital, Skopje, and other cities on Tuesday, against the visit of EU enlargement commissioner Johannes Hahn and the bloc’s support for a proposed multi-ethnic coalition government.

Protest leaders and Macedonia’s right-wing former prime minister Nikola Gruevski and his ally, president Gjorge Ivanov, say the coalition’s plan to boost the rights of ethnic Albanians could lead to the disintegration of the country.

The Social Democrats and ethnic Albanian parties that want to form a ruling majority in parliament accuse Mr Gruevski of stirring up nationalist feeling to prolong the crisis, and to paralyse a special prosecutor’s investigations into former senior officials who are embroiled in a vast spying and corruption scandal.

“In particular, we urge everyone to refrain from any actions and statements which might fuel inter-ethnic tensions or undermine good neighbourly relations. No one should be tempted to play with fire. We are deeply concerned about tensions and hate speech,” Mr Hahn said.

He reiterated the EU’s support for a multi-ethnic coalition that would have 67 of the 120 seats in Macedonia’s parliament, but which Mr Ivanov has refused to endorse, calling it a threat to the state’s sovereignty and territorial integrity.

“In a democracy, everyone must acknowledge parliamentary majorities. We therefore encourage the president to reconsider his position urgently. There is no time to lose,” Mr Hahn said.

Mr Ivanov was in Hungary during Mr Hahn’s visit to Skopje, but the EU commissioner met party leaders.

Mr Gruevski’s party said he complained to Mr Hahn about foreign meddling in Macedonian politics, the alleged political bias of the special prosecutor, and that the coalition’s reform plans were not known before last December’s early elections – describing the situation as the “political rape of the state, its people and their will.”

Previously, Mr Gruevski has urged supporters to “mobilise” to “defend the country” from a supposed threat that he and his allies claim is coming from Albania, the West and billionaire George Soros, who funds liberal NGOs in Macedonia.

Having denounced protests last year against Mr Gruevski – who ran Macedonia for almost a decade – Russia now concurs with the ex-premier and the current demonstrators that the West is imposing a “pro-Albanian” government on the country.

When EU foreign policy chief Federica Mogherini visited Skopje earlier this month, Russia’s foreign ministry claimed the West’s support for the multi-ethnic coalition “may lead to the destruction of Macedonian statehood and destabilisation of the whole of the Balkans”.