Warning over visitors from Ireland entering Britain without quarantine 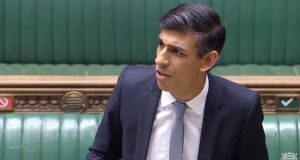 Chancellor Rishi Sunak making a statement in the Commons. He said that from August onwards furloughed workers would be allowed to work part-time. Photograph: PA Wire

A panel of scientific experts has warned that allowing visitors from Ireland to enter Britain without undergoing quarantine could put British efforts to suppress coronavirus at risk.

The group, chaired by former chief scientific adviser David King, welcomed the British government’s announcement of the plan to introduce a 14-day quarantine requirement. However, it described as a “serious loophole” the decision to exempt visitors from the Common Travel Area between Britain and Ireland.

“It will be perfectly possible for someone to fly from somewhere where the level of infection is extremely high, such as New York, to Dublin, and then change planes to travel to London.

“For this, and for other reasons related to the extent of movement across the Irish Border, it makes much more sense either to treat the two main islands of Britain and Ireland as separate entities for human health purposes, as is already the case for animal health, or for the UK and Republic of Ireland to agree a common approach,” it said in a report published on Tuesday.

The independent Scientific Advisory Group for Emergencies (Sage), which has been sharply critical of the British government’s response to the epidemic, includes Gabriel Scally of the Royal Society of Medicine, Anthony Costello of University College London and Allyson Pollock of the University of Newcastle.

The group says that as the focus moves towards finding coronavirus cases, testing, tracing, and isolation, cross-border co-operation will be important.

“Northern Ireland is a particular case, having a land border with the Republic of Ireland. We urge the Northern Ireland Assembly Executive to seek to harmonise their policies with those of the Republic of Ireland in keeping with the commendable Memorandum of Understanding that has been agreed between the two jurisdictions in relation to the coronavirus crisis,” the report said.

Meanwhile, the British government has extended until October its job retention support which has seen the exchequer paying 80 per cent of the wages of 7.5 million employees in almost a million businesses since the coronavirus crisis began.

Chancellor of the exchequer Rishi Sunak said that from August onwards businesses would have to share the cost of the scheme, and furloughed workers would be allowed to work part-time.

In an interview with the BBC, Mr Sunak said the scheme was expensive but necessary as he acknowledged that Britain was heading towards a recession.

“We already know that many people have lost their jobs and it breaks my heart – we’ve seen what’s happening with Universal Credit claims already. This is not something that we’re going to wait to see – it’s already happening.

“There are already businesses that are shutting ,there are already people who have lost their jobs. And, as I said, that’s heartbreaking to me, and that’s why I’m working night and day to limit the amount of job losses.”